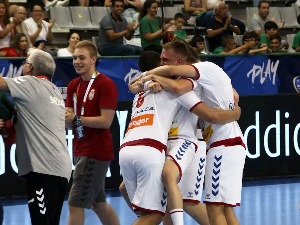 The future of Serbian handball is bright, judging by the result made by the junior team – a bronze medal was won at the European Championship in Portugal.

After losing to Spain in the semi-finals of the tournament, Đorđe Teodorović’s team found the strength to rise and beat Sweden for the second time in the tournament.

The young handball players played an excellent match – in the first half, with an excellent attack, they reached the advantage, which after 30 minutes amounted to five goals (17:12).

The Swedes continued to play much better, on several occasions coming close to a two-goal deficit, but Serbia managed to stop their onslaught.

One of the most deserving was the goalkeeper Marko Mrdović, who with a series of defenses brought security into the game of the “eagles”, while on the other side, the Swedish goal was scored by Miloš Kos, who finished the game with eight goals.

Mateja Dodić and Luka Rogan each scored five goals in the Serbian team, while in the Swedish team Johan Eriksson was the best with six goals.

This is the biggest success of Serbian handball in younger categories since 2006, when we have been playing under our current name.

In the fight for the gold, hosts Portugal and Spain meet.