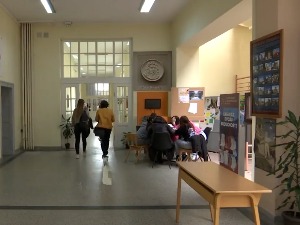 That anyone who wants to can teach a teacher to be smart, apparently, we were convinced when the students together slipped the teacher’s chair and announced it on the social network. They also resort to insults, physical attacks and other belittling forms of behavior.

“Teachers have their hands, feet, and sometimes their eyes tied, so in a system like this, in which you put a child on a pedestal and tell him that he has countless opportunities and some kind of benefits, but you don’t teach him that he has some obligations, then what remains is a teacher who should fight not only against the child, but against the parents,” said Jasna Janković from the Union of Education Unions

Parents, if their child beats, abuses or insults another child or a teacher, are threatened with fines – the law foresees a fine of 30,000 to 100,000 dinars. However, their responsibility is difficult to prove.

“Criminal law implies subjective responsibility, and as a rule, parents are not responsible for a specific criminal act. But misdemeanor legislation and how it recognizes the failures of parents in education, and if these failures of parents led to certain actions, then parents can be subject to misdemeanor liability.” , says Dr. Ivana Stevanović, director of the Institute for Criminological and Sociological Research

However, in the Misdemeanor Court, there are few cases of juvenile violence at school that are brought against parents. In the last four years – only three, and not a single parent was punished.

“Very often we don’t know our children, sometimes they are one thing at home and completely different at school, and if a parent has no knowledge of how his child behaves at school, if it is not pointed out to him, if he is not invited to a conversation, such a parent does not you can charge that he did not supervise the child properly,” noted Olivera Ristanović, president of the Misdemeanor Court.

Therefore, they repeat, in order for violent students to be punished for their behavior at school, and for parents to be informed in time – the same rules must apply to everyone equally.

“To notify the parents of a child who has committed an act that should be sanctioned, and then even stipulates that if the parent does not respond immediately, a psychologist or pedagogue will be assigned to such a child who will represent his interests, but that the parents’ non-response is certainly not a circumstance that will delay the operation of the school”, noted Ristanović.

Janković said that it was shown that we have turned upside down the entire system of first moral norms, then education, and then education – that education is becoming less and less, and that in some cases we cannot provide education, so we have reached the end.

The beginning of a different fight against bullies, experts say, could bring a new law – on juvenile criminal legislation. Its goal should be to respond more effectively to unacceptable behavior.