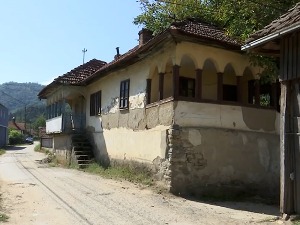 Beauty that ennobles, strength that amazes. The canyon of the river Vučjanka at the foot of Kukavica, carved by water and time, is one of the most beautiful in Europe. The most beautiful love scenes of the film and series Once Upon a Time in Serbia were filmed in Pešina Jaz and Dev Kazan.

Bata from Vučje, the painter who painted Baba Deska and horses with turned horseshoes, knows best how this canyon can be an inspiration to artists.

“With the film Once Upon a Time in Serbia, this canyon saw the light of day, and it is also an invitation to many tourists and nature lovers to come and see one of the most beautiful canyons in Europe,” says Bata from Vučje.

And Vučje still preserves that old patina, the old houses that served as an ideal scenery. In the neighborhood of Conet’s and Ruška’s houses, Gradimir Đokić Gaja hosted the film crew: “There were over 150 actors and extras and helpers here, an exceptional collaboration.”

The people of Vučjan were good hosts, and many of them, as novice actors and extras, were part of a big project. He will remember that experience for the rest of his life.

“They are already recognizing me as the series progresses, so it is very likely that my popularity will grow,” says actor Andrija Stojilković.

Extra Slaviša Mitić says that he had a good experience and that not only he but also his dog Chapa played.

The cinema in Vucje is working again

On weekends, during the broadcast of the series, the streets in Vucje and the surrounding villages are empty. People sit in front of the TV to see and feel the magic.

Bratislav Stanisavljević, director of the Cultural Center in Vučje, points out that the premiere took place after 27 years: “I can say freely – the cinema is working again.”

“I play in my own dialect and I play in a film that talks about our ancestors and a golden time between two world wars,” says Ivan Janković, an actor at the National Theater in Leskovac, of the advantages of working on such a series.

Once upon a time in Serbia – fiction or reality? For the people of Leskov, both, because after watching the series, they are once again convinced that dreams are achievable.