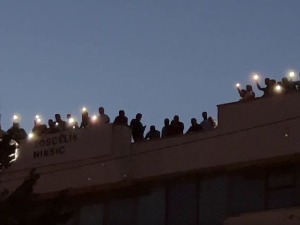 As Ivan Vujović, a representative of Železara workers, told RTCG Portal, that process could last up to half a year. After the strike started, Đurović called the workers, stressing that the strike is not the solution and that he will try to hold a meeting with all actors in the morning.

“The workers climbed onto the roof of the Ironworks, and some are threatening to jump off the roof,” Vujović said.

Vujović said that Đurović invited them.

“As soon as we got on the roof, we were immediately contacted by Minister Đurović, who was always there when we called him. He told us that this is not a solution and that he hopes that a solution will be found, and that he will try to arrange a meeting with everyone who were involved in all this. And he is ready to receive us immediately tomorrow,” said Vujović.

The workers said that they will decide tonight whether they will go in the morning, and they are staying on the roof.

Also, they demanded the urgent arrival of the Prime Minister of Montenegro, Dritan Abazović, and they announced additional radicalization of the protest.

There are about a hundred workers on the roof, reports RTCG.

RTCG also states that the President of the Government of Montenegro, Dritan Abazović, will speak late tonight in Nikšić with the workers of Železara in the vicinity of the factory, and that he is on his way to the factory from Rožaj, where he spoke at the Diaspora Days – Emigrants 2022 event.