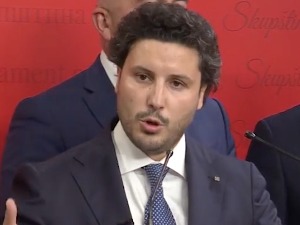 Of the 51 deputies present, 50 voted for the replacement, with one vote against.

Deputies of the Democratic Front, the “Black on White” Coalition, the SNP and one Demos deputy left the hall where the sessions are held before the vote.

After the vote, Abazović said that he was “sorry that organized crime still uses its tentacles and regulates political relations”, rejecting the possibility of URA participating in the government if it is formed before the elections.

“That is the position of the SNP as well, as far as I understand. We have sat at the table for a long time, we have formed two governments and it is logical that someone else should now take the initiative. Let Bečić, Đukanović and Šehović form a new majority,” said Abazović.

The no-confidence vote came a few hours after the URA Civic Movement announced a proposal to reshuffle the government.

The initiative was signed by deputies of the “Black on White” coalition and the Socialist People’s Party (SNP).