The scenario in KiM is critical, we’re strolling on a tightrope 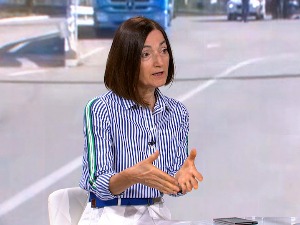 Ljiljana Smajlović, guest in RTS’s Dnevnik, said that she believes that in the next 10 days it is possible to find a compromise solution with Pristina for license plates on cars.

“Here, everything depends on what the West’s position really is and what the West, when it says publicly that both sides must refrain from provocations, is actually telling Kurti and whether he has support for a violent resolution of the dispute, for the demolition of barricades, support to prevent Serbs in Kosovo and Metohija to offer peaceful resistance to his measures,” says Smajlović.

If President Vučić is right and America does not want a conflict, then a change is absolutely possible by September 1, she adds.

“All the more so for all that the mediators keep a secret and try not to take anyone’s side, yet enough information was leaked that Serbia agreed to practically any compromise solution – and to reciprocity, just to preserve the right of the Serbs in Kosovo that they feel like citizens of the Republic of Serbia according to the right they have under Resolution 1244,” emphasizes Smajlović.

It indicates that we are now fighting for the status of Serbs in Kosovo, that they can live in their houses, and that they do not have to obtain permits to enter their houses.

Speaking about whether Kurti can change his attitude, Smajlović says that even if he changes his attitude, he can present this as his victory, because Belgrade agreed to reciprocity.

“When you are the party that does not have the support of mediators, and the opposite party in the negotiations is the favorite of those who supervise and are supposedly neutral mediators, then you have to show that we are ready to compromise, that you are open to any solution except violent persecution,” says Smajlović .

He says that there are frequent interpretations that this is a new phase of negotiations in which the Americans will take over everything.

“It would not be the first time, we saw it in the war in Bosnia, that the Americans say this European solution is not valid. The new phase of negotiations is only a mask for the complete dismantling of the Brussels Agreement. I do not agree that it is called a new phase of negotiations, when It is quite clear, and such voices are also coming to us from Kosovo, that the goal is to dismantle the Brussels Agreement,” Smajlović points out.

She pointed out that because of this, Aljbin Kurti is ready to escalate, because the only thing we can do for him would be to withdraw from all institutions and then break what we agreed to in the Brussels Agreement.

“We cannot have the illusion that the mediators, American and European, will look here at what is right, fair and what was really agreed upon and say here is who is right. That will not happen, but still they cannot be violated so radically all the rules. I think we have a process, this is a process that should lead to normalization, it can’t be led by Kurti saying I don’t want this, I want everything to start over,” she adds.

He points out that he is doing it because he saw that moment and that we are under pressure.

It indicates that this is the best moment for Kurti to try to undo everything that Belgrade has managed so far and to return everything to the beginning.

“My impression is from what Ambassador (Christopher) Hill says when he says Serbia was ready, it left with compromise proposals, that is the advantage when the strongest American man in this part of the world is sitting in Serbia,” says Smajlović and adds that it important, because his word carries the most weight of all American ambassadors in the region.

“If he is telling Washington what he is telling us in Belgrade – Serbia has shown a willingness to compromise, Serbia has taken away several solutions, and if Kurti rejected all those solutions, I cannot imagine that neither the Americans nor the Europeans, regardless of the Ukrainian context, they can give the right to Kurti, especially in those radical demands – let them recognize us, let us determine how much they owe us in reparations for the war, and let us condemn them,” says Smajlović.

“Belgrade is in an extremely difficult situation”

He points out that Belgrade was put in a terribly difficult situation by the war in Ukraine.

“When you read reports in the Western press, no one mentions the Brussels Agreement, the resolution, or the existence of the UN, but the Serbs use the same argument about Kosovo that the Russians use to attack Ukraine, and when that sentence is uttered, it kills you in the eyes of the public,” says Smajlović. .

He tells Kurti to see it and use it.

Serbs from Kosovo and Metohija asked for support from President Vučić, who gave them support promised that there would be no pogroms and persecutionsand when asked if she is afraid that something could happen in the north of Kosovo and Metohija, Smajlović says that she is very afraid.

He also thinks that Kurti is constantly hoping that something could happen on the field, because he wants to cancel everything that was agreed and change the situation on the field.

“I think that this kind of promise must be made to the Serbs in Kosovo, but I fervently hope that when President Vučić says this, he already has a promise from NATO and KFOR that the pogrom of the Serbs cannot happen,” emphasizes Smajlović.

When asked if she believes in the protection of Serbs by KFOR, Smajlović says that she has the impression that she can be trusted.

“I have the impression that when President Vučić speaks so openly, this will not happen and we will protect, I think that NATO and KFOR if they trust us, and it is important that they trust us, I think he is right when he thinks that in Brussels too and someone in Washington will say, don’t open a second front in Europe, and what would Ambassador Hill say, no war started because of license plates, so should it now start because of one letter on the license plates,” says Smajlović.