There will probably be no recognition of Kosovo 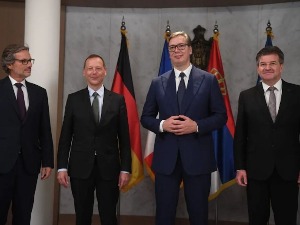 “There will be no discussion about the future of Serbia, and there will be no recognition of Kosovo! I am currently talking with the European Union’s special representative for dialogue between Belgrade and Pristina and other regional issues of the Western Balkans, Miroslav Lajčak, and with the advisors for foreign and security policy of the Republic of France and the Federal Republic of Germany, Emanuel Bonn and Jens Pletner, always ready for compromise solutions, in accordance with the Constitution of the Republic of Serbia and Resolution 1244 of the UN Security Council. No surrender! Long live Serbia,” wrote Vučić.

The three diplomats stayed in Pristina before coming to Belgrade where they met with the prime minister of the temporary institutions of Pristina, Aljbin Kurti.

The situation in Kosovo and Metohija and security challenges will also be discussed at the session of the National Security Council, which President Vučić scheduled for tomorrow at 08.00.