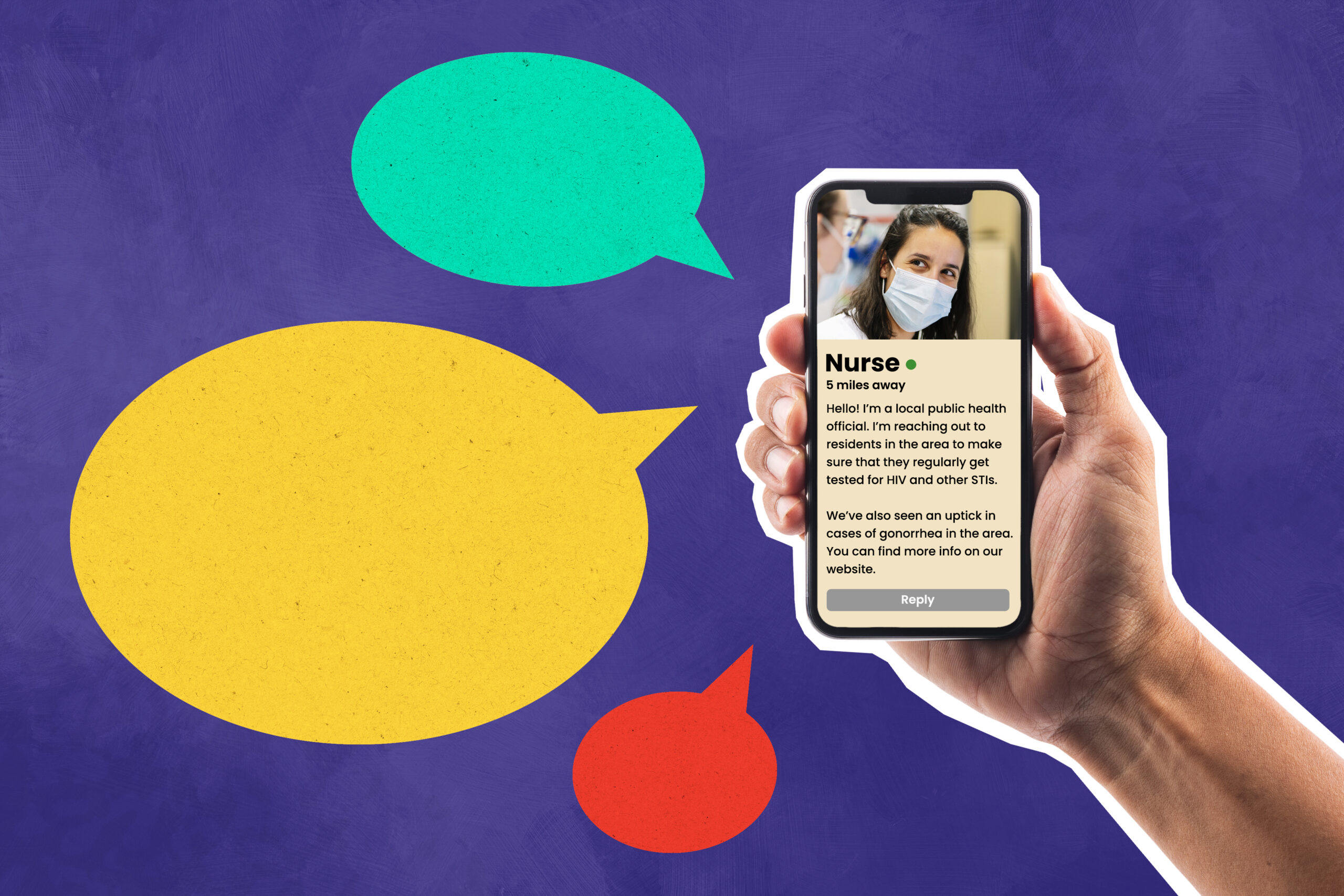 Heather Meador and Anna Herber-Downey use dating apps on the job — and their boss knows it.

Both are public health nurses employed by Linn County Public Health in eastern Iowa. They’ve learned that dating apps are the most efficient way to inform users that people they previously met on the sites may have exposed them to sexually transmitted infections.

A nationwide surge in STIs — with reported cases of gonorrhea and syphilis increasing 10% and 7%, respectively, from 2019 to 2020, according to the Centers for Disease Control and Prevention — isn’t sparing Iowa. The duo has found that the telephone call, a traditional method of contact tracing, no longer works well.

“When I started 12 years ago, we called everyone,” said Meador, the county health department’s clinical branch supervisor. “It’s getting harder and harder to just call someone on the phone.”

Even texting is ineffective, they said. And people aren’t necessarily answering messages on Facebook. The dating apps are where they’re at.

Because many people are meeting sex partners online — via sites like Grindr or Snapchat, which are headquartered in West Hollywood and Santa Monica, California, respectively — contact tracers often don’t have much information to go on, just a screen name or a picture.

So, about a year ago, Meador and her colleagues got approval from their bosses at the local level to build profiles on the app, through which they can contact the sex partners of infected people.

Traditionally, contact tracers interview people infected with an STI about their recent encounters and then reach out to those partners to tell them about the potential exposure.

Linn County contact tracers use the apps throughout their workday. Grindr, in particular, relies on geolocation, showing users matches who are close by. So the tracers use the apps when they’re out and about, hoping to wander into the same neighborhoods as the person diagnosed with an STI. Sometimes users “tap” the contract tracers to see whether they’re interested — in dating, that is.

When the public health officials spot someone they’re looking for, they send a message asking for a call. It’s a successful method: Herber-Downey estimated they make an initial contact 75% of the time.

Linn County’s decision to move online comes as STI rates rise nationally, funding to fight them falls, and people adopt new technologies to meet people and seek fun. “STIs are increasing way faster than the funding we have,” said Leo Parker, director of prevention programs for the National Coalition of STD Directors, all while public health departments — many underfunded — are grappling with new behaviors.

“Social media companies have billions; we have tens of thousands,” said Dr. Jeffrey Klausner, a University of Southern California public health professor, who previously served as San Francisco’s director of STD prevention and control services. That funding disparity means few public health departments have staff members who can go online. “It’s only really in major cities that they have anyone who’s tasked for that,” Klausner said.

Even when departments have enough employees to take on the challenge, institutional support can be lacking. Some public health officials question employees who log into the apps. Klausner once testified on behalf of a Ventura County, California, contact tracer who was fired for using sex sites for work.

But with people migrating online to meet partners, following them there makes sense. “We’re now in a digital age,” Parker said. Individuals might not be out, or might be questioning their identity, making online venues comfortable, anonymous spaces for romance — which, in turn, means people are harder to reach face-to-face, at least at first.

What’s more, online spaces like Grindr are effective public health tools beyond contact tracing. They can be useful ways to get the word out about public health concerns.

Parker and the Linn County officials said public service announcements on dating apps — advocating for condom use or sharing the business hours for sexual health clinics — do seem to lead people to services. “We do have individuals coming in, saying, ‘I saw you had free testing. I saw it on Grindr,’” Parker said.

Grindr, which touts itself as the biggest dating app focused on LGBTQ+ people, pushes out messages and information to its members, said Jack Harrison-Quintana, director of Grindr for Equality. That engagement intensified during a 2015 meningitis outbreak among LGBTQ+ communities in Chicago, for example.

During that outbreak, the app sent citywide messages about vaccination. Then Harrison-Quintana took advantage of the service’s design: Using the site’s geolocating capabilities, Grindr workers targeted messages to specific neighborhoods. “We could go in and really go block to block and say, ‘Is this where the cases are showing up?’” he said. If so, they sent more messages to that area.

That campaign encouraged further efforts from the app, which regularly sends public health messages about everything from covid-19 to monkeypox to the platform’s base of roughly 11 million monthly users. Grindr also allows users to display their HIV status and indicate whether they’re vaccinated against covid, monkeypox, and meningitis.

There are a couple of things Grindr won’t do, however. The company won’t allow public health departments to create institutional accounts. And it won’t allow automated notifications about STI exposures to be sent to users.

That’s due to privacy concerns, the company said, despite calls from public health advocates to deploy better messaging features. Grindr believes that a government presence on the app would be too intrusive and that even anonymous notifications would allow users to trace infections back to their source. (When asked about public health officials who join the site on their own, company spokesperson Patrick Lenihan said: “Individuals are free to say something like ‘I’m a public health professional — ask me about my work!’ in their profile and are free to discuss sexual and public health matters however they see fit.”)

Grindr’s position — however disappointing to some in the public health world — reflects a longtime balancing act attempted by the private sector, which aims to square government concerns with users’ privacy interests.

Klausner pointed to a 1999 syphilis outbreak in San Francisco as one of the first times he saw how those interests could be at odds. The outbreak was traced to an AOL chatroom. Based on his research, Klausner said it seemed as though people could go online and “get a sex partner faster than you can get a pizza delivered.”

The online industry has advanced since then, Klausner said. He helped one service develop a system to send digital postcards to potentially exposed people. “Congratulations, you got syphilis,” the postcards read. “They were edgy postcards,” he said, although some options were less “snarky.”

Overall, however, the dating app world is still “bifurcated,” he said. For public health efforts, apps that appeal to LGBTQ+ users are generally more helpful than those that predominantly cater to heterosexual clients.

That’s due to the community’s history with sexual health, explained Jen Hecht, a leader of Building Healthy Online Communities, a public health group partnering with dating apps. “Folks in the queer community have — what — 30, 40 years of thinking about HIV?” she said.

Even though STIs affect everyone, “the norm and the expectation is not there” for straight-focused dating apps, she said. Indeed, neither Match Group nor Bumble — the corporations with the biggest apps focused on heterosexual dating, both based in Texas — responded to multiple requests for comment from KHN.

But users, at least so far, seem to appreciate the app-based interventions. Harrison-Quintana said Grindr has landed on a just-the-facts approach to conveying health information. He has never received any backlash, “which has been very nice.”