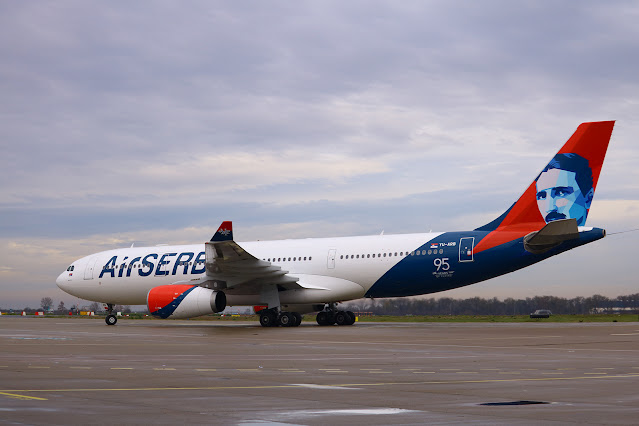 Air Serbia is seeking a third Airbus A330-200 aircraft in order to further expand its long haul operations. The carrier’s CEO, Jiri Marek, told “Routes”, “At the moment we are looking for a third A330 aircraft, just to be ready. We are currently working on the shortlist of the third A330 aircraft with the same engine type as on our current A330 fleet and getting ready for the opening of the market … Sourcing a long haul aircraft could take up to nine months or more. Having said that, we were able to introduce our last addition to the fleet in less than four months”.

Expanding the company’s operations to China will be a priority once the country eases its Covid-19 restrictions. Services to Tianjin, which were launched just ten days ago, are now sold out from Belgrade until January 20. “Tianjin is one of the biggest cargo hubs in China and also contributes to positive trends of passenger bookings”, Mr Marek said. The airline is looking at introducing services to Shanghai and increasing frequencies to Tianjin, once pandemic-related constraints are eased, which may occur sooner rather than later. China’s aviation regulator said last week it plans to increase flights with a goal to restore the country’s average daily passenger flight volumes to 70% of 2019 levels by January 6. Between January 7 and January 31, average daily passenger flight volumes should increase to 88% of 2019 levels, before the Covid-19 pandemic began. The industry should be in a “stable recovery period” by the end of March, the regulator said.

Air Serbia is also looking at adding another destination in North America once it acquires its third A330 jet. “Some of the logical choices would be Miami or Toronto”, Mr Marek noted. The Serbian carrier is set to commence three weekly flights to Chicago next May and will increase frequencies to New York to daily. Based on indirect traffic volumes, the busiest werved North American destination from Belgrade, following the launch of Chicago, will be Toronto, followed by Los Angeles, Miami and Washington. However, these numbers only take into account those passengers either starting or ending their journey in the Serbian capital and do not factor in potential transfer demand from other markets.

After Tuition, Books, and Room and Board, Colleges’ Rising Health Fees Hit a Nerve