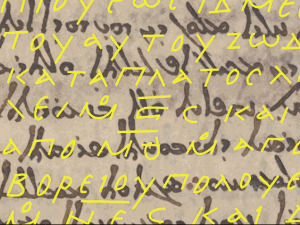 A copy of the star map of the astronomer Hipparchus of Rhodes was discovered under the manuscript of Jovan Lestvičnik, the author of the famous treatise written around 600 AD, The Ladder, in which the method of ascending the soul to God is described as a ladder, according to a press release issued by the Museum Bibles, reports CNN.

Scholars have long known about Hipparchus’ star catalog because of references to it in other ancient texts – but their search for the original document has been unsuccessful.

“The newly discovered text is a remarkable discovery that highlights the creative use of multispectral imaging technology to uncover ancient lost texts,” Brian Hiland, curator of medieval manuscripts at the Museum of the Bible, said in a statement. “The discovery also confirms the accuracy of Hipparchus’ measurements.”

Careful analysis showed that the ancient parchment had been used multiple times.

First, in the 5th or 6th century, a Greek scribe copied Hipparchus’ Catalog of the Stars in which the drennic astronomer entered about 850 stars in 134 BC and was the first astronomer to determine a “magnitude” scale that indicates their apparent brightness . Hipparchus is considered the father of trigonometry and one of the greatest astronomers of antiquity.

Then, in the 10th or 11th century, a scribe in the monastery of St. Catherine on Mount Sinai erased the old writing in order to use the parchment for something else, the Museum explains. The monastery scribe seems to have collected sheets of parchment from at least a dozen different manuscripts.

He scraped off the runny ink and washed the parchment before copying the Syriac translation of the Ladder.

But over time, the remains of the scraped ink began to darken – so researchers realized that the document was a palimpsest, with layers of different texts written on the same material.

The museum performed multispectral imaging of manuscript sheets in 2013, 2015, 2017 and 2018. They then sent the manuscript to Cambridge University to study the underlying text.

The researchers published their findings this month in the journal History of astronomy.

In addition to confirming that Hipparchus’ text was hidden beneath a Christian treatise, the researchers also found that Hipparchus’ measurements were more accurate than those of his successor, the mathematician and astronomer Ptolemy.