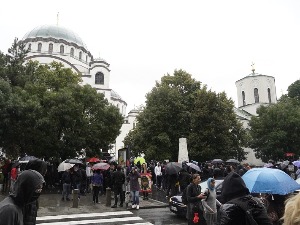 Members of the Criminal Police Directorate, in consultation with the competent prosecutor’s office, identified two persons, citizens of Turkey and Italy, against whom, on suspicion of having committed the crime of inciting national, racial and religious hatred and intolerance during Europride, a criminal complaint was filed.

A search has been launched for those two persons, given that they are unavailable to the Serbian investigative authorities, according to the Ministry of Interior’s announcement.

It is added that “in consultation with the Higher Public Prosecutor’s Office for high-tech crime, measures will be taken with the aim of further dealing with persons who shared posts with extremist content on Instagram and Twitter addressed to members of the LGBT community”.

The police will file two criminal charges against those persons due to the suspicion that they have committed the criminal offense of endangering security, according to the announcement.

“Police officers are continuing further work to establish the identity and possible denial of entry to other participants of the Europride event, as well as to determine the identity of the sender of the threats to the Europride 2022 Info Center, which were sent via email addresses before the event,” concludes the MUP.