Trilateral assembly of the presidents of France, Germany and Serbia tomorrow in Prague 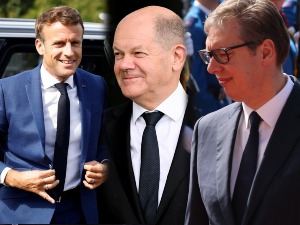 A trilateral meeting of the presidents of France, Germany and Serbia will be held in Prague on Thursday, where the first summit of the European Political Community is reflected.

On October 6, President Vučić will participate in the Summit in Prague, where the initiative to establish a European political community will be discussed as a platform for dialogue between existing members of the European Union and those countries that aspire to it, announced the Service for Cooperation with the Media of the President of Serbia.

During the Summit, President Vučić will also participate in the Round Table on energy, economy and climate issues.

One of the main topics of the first summit of the European political community in Prague will be alignment with the policy of sanctions against Russia, and Serbia will be expected to explain why it is not aligned with the EU’s common position, said a European official familiar with the preparations for the meeting.

Diplomatic sources in Brussels also assess that the summit in Prague is not a meeting between the EU and the “rest of Europe”, but a gathering of various partner countries, including those that do not have, or do not want, the prospect of EU membership.

“That is why the possible consequences of Serbia’s non-compliance for its further European path will be decided in a different format, which brings together only 27 EU members,” they state in Brussels.

44 countries will gather in the capital of the Czech Republic, which currently holds the presidency of the European Union. At the table will be 27 EU member states and 17 other states, including the United Kingdom, Ukraine, Turkey, Armenia, Azerbaijan, Norway, Switzerland and all the countries of the Western Balkans.