The Millennium Challenge Corporation (MCC) has confirmed that in the request addressed to it for the annual budget of 2022 by the US President, Joe Biden, there are also 200 million which are considered necessary for the postponement of the American projects in Kosovo.

The document Justification of the Congress Budget for 2022, published by MCC, states that through the development of the gas sector and renewable resources, an attempt will be made to facilitate the reliance of Kosovars on coal, reports Gazeta Express.

“MCC and the Government completed the studies in 2020 to evaluate three proposed projects: the development of Kosovo’s natural gas sector, the establishment of energy reserves to balance the energy system and improve the distribution of electricity. “After reviewing the results of the studies, the Government sought to move forward with the development of the gas sector and the creation of energy reserves with the aim of facilitating the integration of renewable sources, easing Kosovo’s dependence on coal and achieving the goals of decarbonization.” stated in the document. 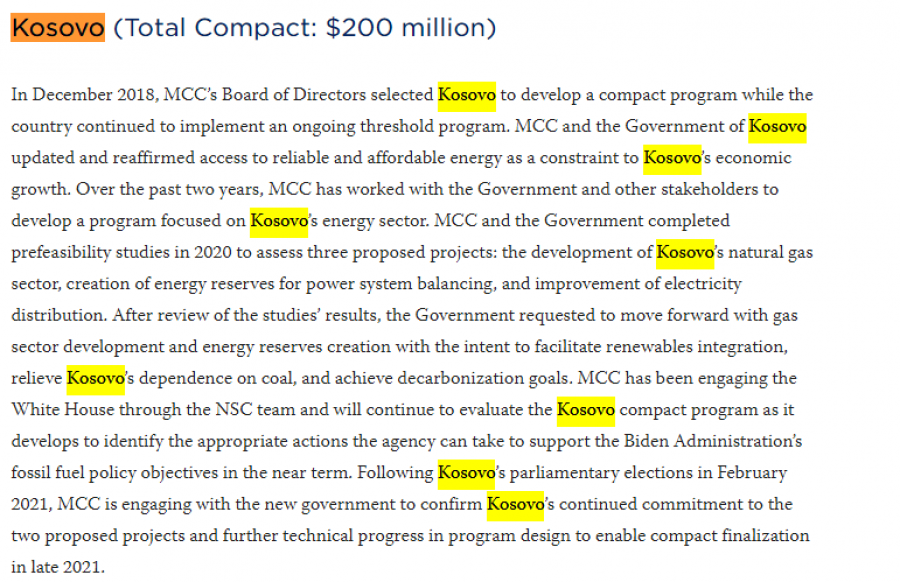 They have foreseen these projects as a form for the economic development of Kosovo, it is said in the budget justification document. The implementation of MCC projects comes as a result of the normalization agreement between Kosovo and Serbia.

The Millennium Challenge Corporation has said it hopes to work with the new government. However, skepticism about a co-operation between the two sides could be heightened after Prime Minister Albin Kurti said he would not implement the Washington Agreement.

“I do not believe that it is intended to be implemented, there are some positive elements, so we should see it as a set of points and not a deal to be taken or left”, he had declared.