Direct hit! A significant success of the Dart mission, the spacecraft collided with an asteroid 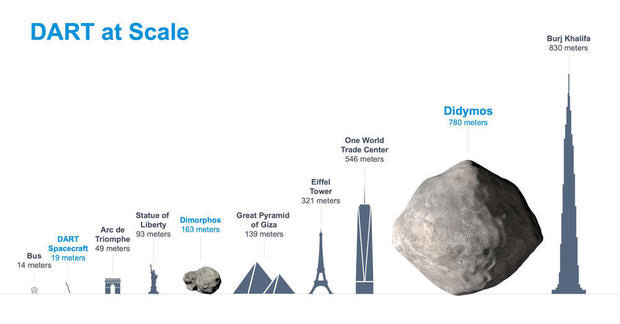 That’s it, folks! Tonight’s Dart mission, the first attempt at planetary defense, was successfully executed. The transfer has officially ended. We will know more information during the day.

The course of the asteroid has certainly changed

Darth’s collision with Dimorphos almost certainly changed the course of the asteroid, taking into account the fundamental laws of physics of conservation of energy and momentum. If Dimorphos’ orbit around the larger asteroid Didymos does not change, then Newton’s laws will be broken.

Nasa: A New Age for Humanity

For the first time in history, we sent a spacecraft and collided with an asteroid seven million kilometers from Earth.

“Humanity has entered a new age, an age where we potentially have the ability to protect ourselves from the dangers posed by asteroids.” Wonderful,” said one of the heads of NASA, Laurie Glaze.

The last shots from the Dart before the crash

Right in the center!

The minutes required for Dart to collide with Dimorphos are now counted on the fingers of one hand!

Finally precision targeting successfully performed. Experts at the command center in Maryland gave the green light to continue the mission and collide Dart with Dimorphos at a speed of 24,000 kilometers per hour.

In the movies, the most common solution for celestial bodies that threaten the Earth is for humanity to destroy them, but scientists point out that this is precisely the least desirable solution.

“We don’t want to detonate the object into thousands of smaller pieces, we want to keep it intact and just move it off course.” That way we will follow him more easily. If we were to make hundreds of smaller objects from one large object, it would be more difficult to track them, and some would still represent a potential danger,” points out Andy Rivkin from NASA’s Dart team.

From the operations center of the Dart mission in Maryland, they say that the spacecraft’s navigation systems managed to target the asteroid, the New York Times reports. All parameters have been checked and NASA experts are optimistic that tonight’s mission will be successful.

The ratio of the size of asteroids that hit Nasa

While we wait for the Dart spacecraft to reach its destination, NASA has released a rather illustrative graphic of the size of the asteroid Dimorphos, which is tonight’s target.

The Dart mission is the first practical test of a technique that could be used in the future against other potentially dangerous asteroids – using kinetic force to redirect asteroids and spacecraft on a collision course with Earth.

Dart (Double Asteroid Redirection Test) is launched on November 24, 2021and the target of the “thorn” was a dual asteroid system that moves around each other, at a distance of about seven million kilometers from Earth.

The larger asteroid Didymos has a diameter of 780 meters, while the diameter of the smaller Dimorphos is 160 meters.

None of the asteroids posed a risk to Earth and that is one of the reasons why they were chosen for the mission. An even more important reason is that they are part of a binary asteroid system, which is why astronomers on Earth will be able to measure the result of the impact.

As the asteroids orbit each other, the sunlight reflected off them waxes and wanes, depending on their position during their 12-hour orbital cycle.

Astronomers on Earth can monitor and notice any changes before and after a collision with a spacecraft.