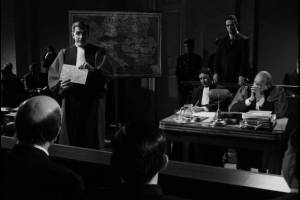 BELGRADE: Gordan Matić’s black and white Serbian court drama Bullets over Marseille / Pucnji u Marseju premieres in Belgrade on October 9, 2021 and commemorates the anniversary of the murder of the Serbian and Yugoslav king Aleksandar in Marseille that day in 1934.

Bullets over Marseille / Pucnji u Marseju is a historical judicial drama about the trial of the terrorists who killed the Yugoslav King Alexandar and the French Foreign Minister Louis Barthou. This murder changed the future of the European continent.

Matić and Ivanović also produced the film as part of the RE-KREATIVNO DUD and Krupni plans. Jordančo Petkovski is the executive producer. The project was supported by the Ministry of Culture and Information of the Republic of Serbia and the Film Center Serbia, both before Matić’s involvement in the FCS. Gordan Matić has been the director of the Serbia Film Center since July 2019.

The film will hit theaters the day after its premiere in the Serbian capital. Bullets Over Marseille / Pucnji u Marseju are distributed themselves.

RE-CREATIVE DUD (Serbia)
Close up (Serbia)
This email address is being protected from spam bots! You need JavaScript enabled to view it.

Do you know how many years Shyhrete Behluli is only 10 days old?