I would really like Ricciardo to return to McLaren 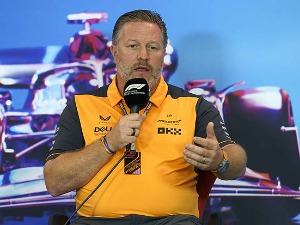 McLaren has terminated the contract with Ricciardo, who will be Red Bull’s reserve driver this season.

“Ricciardo is talented. He showed us that in Monza, he won eight races. I hope to see him back on the track in F1, which is his wish, and the doors of McLaren are open for him. If the stars align, I would love to to race him again,” Brown told McLaren’s YouTube channel.

Before McLaren, Ricciardo drove for Renault, Red Bull, Toro Rosso and Hispania Racing. This season, Lando Norris and Oscar Piastri will drive for the McLaren team.

“We think Oscar will be a sensational racer. If you look at his career, you will see that he won a lot in his first year. He has a great mental approach to the sport and now that Lando has a lot of experience, we think we have a great mix of experience and youth in the team,” he said. is Brown.
The new F1 season begins on March 5 with the Bahrain Grand Prix.