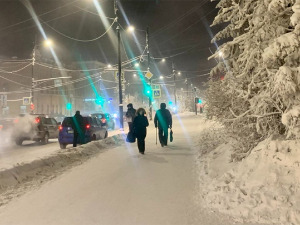 In the city of Yakutsk in eastern Siberia, which is one of the coldest places in the world, there was an abnormally long cold snap.

January is the coldest month and, although they are used to cold temperatures, residents of the remote region take extra measures to keep warm.

“You can’t fight it. Either you adapt and dress accordingly or you suffer,” one resident, wearing two scarves and multiple layers of gloves, a hat and a hood, told Reuters.

According to one local woman selling frozen fish at a local market, layering is key: “Just dress warmly. In layers, like cabbage”.

Yakutsk is home to less than a million residents, and the city’s winters can be extreme – even by Russian standards.

Although known for record low temperatures, this Russian region drew international attention in July when haze from nearby wildfires swept through the forests and enveloped the region in thick smoke.

Scientists then pointed out that they are concerned about the increasing frequency of fires caused by climate change in the Siberian Arctic.