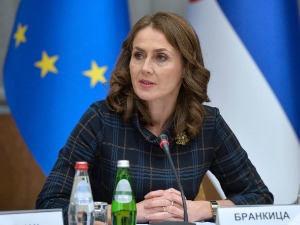 MP Miloš Jovanović used an extremely disgusting, inappropriate, misogynistic and sexist comparison, pointed out the Commissioner for the Protection of Equality, Brankica Janković.

“With all the fences that were used, what was said represents an insult to women and discrimination on the basis of gender. Such a comparison would not have been made if the question had been asked by a man, while the subtle way and the raised fence from the question, does not reduce the weight of what was said,” the commissioner emphasized .

The commissioner points out that all participants in public and political life have an additional obligation to refrain from statements that insult, humiliate or harass women, bearing in mind that women in Serbia face discrimination and violence every day.

In the Parliament of Serbia, when asked by N1 journalist Emina Kovačević about the price of Serbia’s abandonment of the European path, Miloš Jovanović responded with indecent sexual connotations.