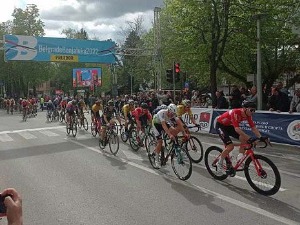 The race, in which cyclists from 30 countries and four continents will participate this year, will start on April 20.

“This year, the race will be held for the 17th time. It was declared by the Government of Serbia and Srpska to be an event of the greatest importance for special ties in the field of sports, and as such it exists and attracts the world’s biggest teams. It started as a small race, and today is one of the biggest brands in Bosnia and Herzegovina, certainly the biggest cycling event in Republika Srpska, and one of the biggest in Serbia,” said Kuvalja.

The director of the race pointed out that they are proud of the fact that the race, with the help of the Government of Serbia and the relevant Ministry of Sports, as well as other institutions, and with the support of the Government and the President of Republika Srpska, breaks all boundaries.

“The Belgrade – Banjaluka race is the only sporting event that takes place simultaneously in both countries, and on the first stage from Belgrade to Bijeljina, the competitors cross the border without stopping. This year’s race starts on April 20, with the participation of cyclists from 30 countries, 25 teams and exactly 175 competitor”, Kuvalja points out.

“This year, the city of Belgrade stood by the race more firmly than before, increased its financial resources, and the race will start in front of the City Assembly. Also, thanks to Bijeljina, which will once again host the finish line of the first stage and the start of the second stage, then the municipality of Vlasenica, where the goal of the most demanding second stage, after that Doboj and Prijedor and of course Banja Luka, where the last stage is.

Kuvalja emphasized that the race Belgrade – Banja Luka is not only a sports event, but also an economic, political and tourist event, which unites the Serbian people from both sides of the Drina, promotes friendship and togetherness.

“Teams from four continents are coming, we managed, with great effort, to reach the first category from the stage race, which is only a step lower than the biggest races like the Tour de France and the Giro d’Italia. This is an opportunity to see the best cyclists on our roads. It is important that Serbia and Srpska have cooperation, not only through racing, but also through other sports, this is also shown by our athletes who play for the Serbian national team to a great extent. We in the Republic of Srpska support Serbia from the bottom of our hearts, we look forward to victories together and we cry when it is lost,” said Kuvalja.

Will Your Smartphone Be the Next Doctor’s Office?