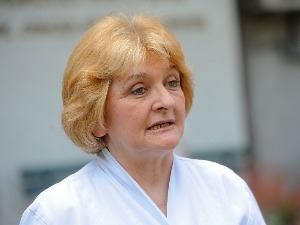 Danica Grujičić, at the constitutive session of the Alliance for Health, organized by NALED, said that all great ideas ultimately boil down to the development of environments where citizens most fulfill their life needs, which is the local community.

“The project of the Ministry of Health on the family doctor is actually an idea, that through greater support to family doctors, which are doctors in the most local community, we can achieve primary health care that achieves a higher level of health care for the whole nation through preventive action,” Grujičićeva said.

About the introduction of electronic records

The topics discussed at the session included the introduction of a single electronic health record.

The establishment of an electronic file will be one of the key reform priorities of the Alliance for Health, which, it was stated at the meeting, will provide support to the Ministry of Health and related institutions in this work.

It was pointed out that the idea of ​​introducing the file is that doctors in private institutions also get access to this record, in order to provide more efficient treatment.

In the focus of the alliance, as it was said, in the next two years will be work on reducing waiting lists and increasing the number of services that citizens will be able to perform in private healthcare at the expense of the RFZO, as is now the case with dialysis, in vitro fertilization, hyperbaric chamber and cataract.

The third priority, the participants said, is the further digitization of procedures, primarily in connection with clinical studies and obtaining drug licenses, so that new, modern and more effective therapies are available to the citizens of Serbia.

The newly elected president of the Association for Health Vukašin Radulović stated that the Association will support the implementation of the Digitalization Program in the health system, in the part that foresees the introduction of the eHealthcare service.

“Our goal, among other things, is for doctors in the private sector to have the opportunity to open sick leave for patients. Our focus is also on the introduction of the eUput service, where we want to enable specialist doctors to issue instructions for further treatment, which would save citizens from returning to their chosen doctor. And finally, the goal is to extend the eRecept service, which is valid for drugs from the A list, to B, C and D list drugs as well,” he said.

The director of the IT sector in RFZO Marko Jovanović emphasized that this institution introduced the SAP information system and thereby established an insight into the goods and material condition of health institutions, all with the aim of optimizing spending and creating large financial savings.

In the next month, the association will present to the ministry an analysis and recommendations for improving the procedure of placing the medicine on the market, which instead of nine months, lasts two to three years, which makes it difficult for citizens to access medicines.

Also, as the participants of the meeting agreed, emphasis will be placed on simplifying clinical trials of drugs.

It was stated that this procedure in Serbia lasts up to three times longer than in other countries and deters companies from investing in tests in our country.

The leadership of the Alliance

The members of the Alliance elected a new leadership.

In the next two years, this working body will be chaired by Vukašin Radulović, co-founder of the company “Heliant”, while Una Ljubičić, director of rare diseases at the company “Fajzer”, Vladimir Tipsarević, director of public policies and public relations at “Novo Nordisk” were elected as vice-presidents. Farma”, Dejan Pešić, director of “MediaGrup”, and Lidija Dimitrijević, deputy mayor of Leskovac, will participate in the work of the Alliance from the ranks of local self-governments.

Much of the CDC Is Working Remotely. That Could Make Changing the Agency Difficult.