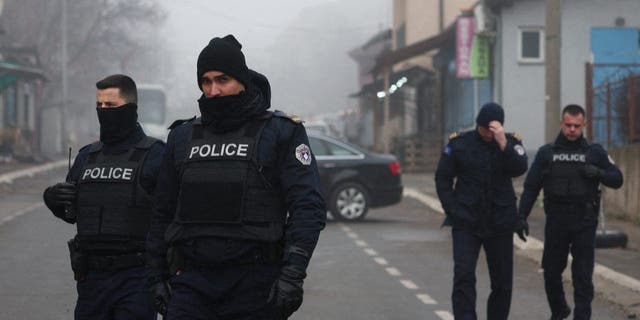 Serbia’s Interior Minister Bratislav Gasic said Monday he “ordered the full combat readiness” of the troops on the border after he was instructed to do so by Serbian President Aleksandar Vucic.

The order was issued to ensure that “all measures be taken to protect the Serbian people in Kosovo.”

Kosovo police officers patrol at a roadblock near the northern part of the ethnically-divided town of Mitrovica, Kosovo, Dec. 27, 2022.
(REUTERS/Florion Goga)

Hours later, Serbs in the ethnically divided northern Kosovo city of Mitrovica erected roadblocks for the second time since August.

The moves come after months of roiling tension and claims that Pristina, Kosovo’s capital, is preparing to attack the ethnic Serbs in its northern regions.

The Kosovan government accused Serbia on Tuesday of attempting to destabilize the government.

“It is precisely Serbia, influenced by Russia, that has raised a state of military readiness and that is ordering the erection of new barricades, in order to justify and protect the criminal groups that terrorize… citizens of Serb ethnicity living in Kosovo, ” Interior Minister Xhelal Svecla said, according to Reuters.

Serbia has denied these accusations.

Relations continue to be strained between Serbia and Kosovo – which is majority Albanian. The Serbian government, and its supporters in northern Kosovo, have refused to recognize Pristina’s independence after it broke away following a year-long war between 1998 and 1999.

NATO security forces helped to end the war and have since maintained a strong peace-keeping presence in the region. 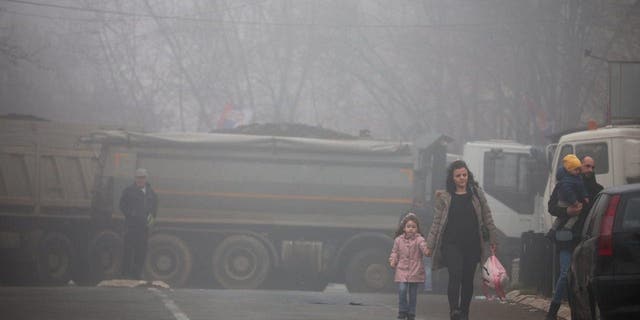 Local Serbs walk near a roadblock, near the northern part of the ethnically-divided town of Mitrovica, Kosovo, Dec. 27, 2022.
(REUTERS/Florion Goga)

The US and over 100 nations, including the majority of NATO states, have recognized Kosovo’s independence since 2008.

Neither Russia nor Serbia recognize Pristina’s sovereignty and have worked to block the nation from joining the UN.

In August, NATO once again stepped in to try to ease tensions after Serbs in northern Kosovo raised roadblocks in protest of a regulation requiring all ethnic Serbs to register for government documents and car license plates issued by Pristina.

The mandate was later postponed to ease the hostilities.

“Kosovo cannot engage in dialogue with criminal gangs and freedom of movement should be restored,” the Kosovo government said Monday, according to Reuters. “There should not be barricades on any road.” 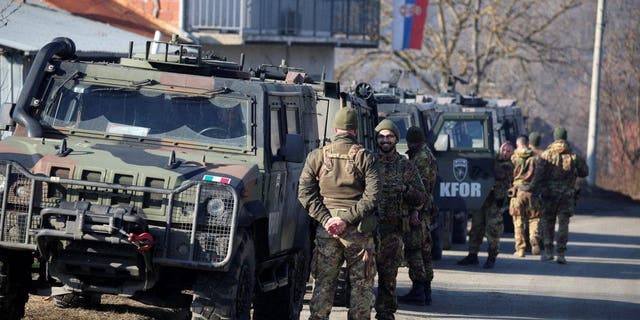 Members of the Italian Armed Forces, part of the NATO peacekeepers mission in Kosovo, stand guard in Rudare, near the northern part of the ethnically-divided town of Mitrovica, Kosovo, Dec. 27, 2022.
(REUTERS/Florion Goga)

Pristina said it would wait for NATO officials to mediate and once again take down the barricades.

“We urge all sides to help enable security and freedom of movement in Kosovo, and prevent misleading narratives from affecting the dialogue process,” said KFOR, the NATO-led Kosovo peace-keeping force.

The Associated Press contributed to this report.

Caitlin McFall is a Reporter at Fox News Digital covering Politics, US and World news.