The departure of the Swiss maestro, Federer retired with tears and cheers 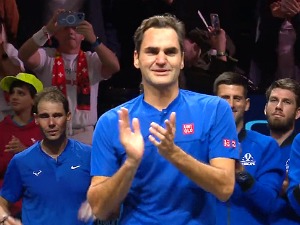 An era has come to an end, the era of Roger Federer, a career spanning 24 years. He got everything from tennis, and Roger gave him more. The Swiss played a doubles match with Rafael Nadal in a magnificent atmosphere in the packed “O2 Arena” in London, in front of 17,500 spectators. retired from active tennis.

It was extremely emotional from the moment Roger Federer and Rafael Nadal entered the court. Probably the whole career passed through the head of Fedex, who “defended” himself with a smile on his face, and he was supported by the entire European Team headed by Novak Djokovic, who was also in the role of head coach.

The match has started. Although it was a show, from the start both teams started fiercely, they guarded their serves, and then at one point Federer did the impossible, he found a hole in the net. More precisely, one forehand managed to slip through the net by the post that holds it.

It was interesting at every break between games. The audience cheered to the max and raised the atmosphere. On the other hand, Novak used the opportunity to advise Rafa and Federer on what to pay attention to. Obviously, all three took this match seriously. Of course, it all ended with a smile on the part of all three.

The fight flared up quickly, and in the ninth game, Team Sveta was the first to reach a break opportunity. A strong smash by Federer followed and Team Europe defended itself and won the game.

Already in the next game, the Europeans threatened, taking away the opponents’ serve and winning the first set with 6:4. Team Sveta did not have a chance to make amends.

The great fight continued in the second set. Nadal and Federer threatened first. After a great point, they returned to the game and reached 15:30, but the rivals managed to repel their attack.

In the next game, the World Team scored three tied break opportunities on Nadal’s serve. Rafa saves two with great serves. However, Federer failed to catch the very difficult ball and Sock and Tiafoe break the lead in the second set.

After the break, Team Europe won and missed two tied break opportunities. He did not release another one after that. Sok and Tiafo manage to tie two more points and win the game, thus maintaining the break advantage.

The World Team’s next serve brought two more tied break points for Nadal and Federer, they use the first and break back.

After that, both pairs were confident on their serves until the eleventh game. Then Team World wins three tied break opportunities on Nadal’s serve. The Europeans manage to get away and reach an equaliser. Another tie followed after the lead for Nadal and Federer. With a double serve mistake, Nadal gives his rivals a fourth break chance. Federer had two strong smashes for a new tie.

Sok served to stay in the match, Team Europe reached the tie, but failed to win a break chance. Sok and Tiafoe tied two more points for 6:6 in the second set – tiebreak.

Team Sveta opened this period of play with a mini-break. In the third point, the Europeans return the break. However, Nadal makes a mistake again and the rivals once again gained an advantage, and then a 5:2 lead. With a new mini-break, the World Team reaches four tied set points, uses the first one and reaches a tie in sets.

The winner was decided in a match tie-break that was played until 10. It started with a mini-break of Team Europe. They continued with an excellent game and quickly reached 3:0. Then the rivals were sure of their serve – 3:2.

The World Team returns a mini-break to Nadal’s serve, then takes away his second serve and reaches a mini-mini-break advantage – 4:3. The Europeans are coming back, taking away the rivals’ service for a new tie.

Without mini-breaks in the next few services, Team Europe took the lead with 6:5. The World Team took care of the new tie before the change of sides. An exchange of mini-breaks followed and the score was tied again. Then Federer and Nadal take away the rivals’ serve again and reach the match point on Federer’s serve.

However, the rivals manage to pull away, return the mini-break and reach a 9:9 tie. Then Team World comes to the first match point. They use it and win this match.

The world team tied at 2:2 after the first day of the Laver Cup.

The defeat in this match did not diminish the spectacular retirement of the “Maestro from Switzerland”, who at the end broke down in tears when giving a gift to the audience.

Federer had to return to the field one more time, and then, embraced by his entire team, he stood in the middle of the field and once again bowed to the audience, which greeted the great Fedex with thunderous applause.