There is no such thing as a room for nervousness, as a result of we’ve got a bonus within the desk 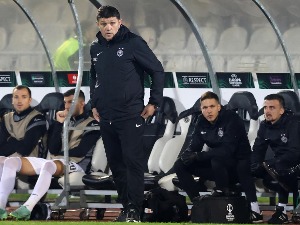 In the event of a triumph in France, the Black and Whites would mathematically secure a place among the 16 best teams in the third-ranked European competition before the end of the round.

If Partizan finished second in the group, it would play in the round of 16.

“I’m not thinking about whether we’ll be first or second, it’s important to me that we fulfill the goal we set when we started playing these games, which is to play European football in the spring. Now, what will happen tomorrow… . It would be nice if we won that match and could play the last round more calmly, but I am sure that the boys will be concentrated and will give their maximum, that we will try to finish everything on Thursday. They are aware of all this.” Petrić said at a press conference in Nice.

The coach of Partizan compared tomorrow’s and the previous match with Nice, which ended in a draw in Humska (1:1).

“As for tomorrow’s match, it is a kind of second half, because we played the first half in Belgrade. Now a totally different match follows, for the simple reason that we have an advantage in the table, we can act on the field the way we want. There is no the need for our players to be somewhat nervous, they should be relieved, give their maximum and enjoy themselves. Nice like Nice, in the last two games she played erratically, but that should not be misleading, she certainly has the quality to change the course of events on field and cause us a problem,” Petrić said.

Partizan is the leader of group D with eight points, Nice is in second place with five, and Cologne and Slovakia have four points each.

The match of the fifth round of Group D of the Conference League between Nice and Partizan will be played tomorrow from 18:45 with live broadcast on RTS 1.