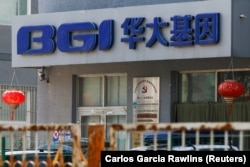 China’s BGI Group — the world’s largest genetic research company — is grappling with US sanctions and facing investigations in Europe over its alleged links to the Chinese military. But the corporation has received a warm welcome in Serbia.

Belgrade recently announced plans to deepen its cooperation with BGI, formerly known as the Beijing Genomics Institute. Serbian Prime Minister Ana Brnabic and BGI representatives announced in November that the Chinese company will play a central role in a new project in the Serbian capital that is scheduled to open in 2023.

A $200 million project, the BIO4 campus is meant to be a hub for scientific research and investment in the Balkan country and will focus primarily on biomedicine and biotechnology.

The project will build on other areas of cooperation between Serbia and the Chinese gene giant, including the Center for Genome Sequencing and Bioinformatics that opened in December 2021. The center aims to bring together researchers from BGI with their Serbian counterparts under the umbrella of Serbia’s state -run Institute of Molecular Genetics and Genetic Engineering.

BGI’s expanding partnership with Serbia comes despite the company dealing with investigations across the European Union due to its Alleged misuse of genetic data and sanctions in the United States for its suspected links to the Chinese military.

Many of the charges stem from the findings of a 2021 report by Reuters that showed BGI was using prenatal tests — carried out during pregnancy to find out if the fetus has a genetic disorder — that were developed in collaboration with the Chinese military to collect genetic data for sweeping research on the traits of populations.

The prenatal tests were part of the production line at the center associated with BGI in Belgrade. The revelations have so far led to investigations in three EU countries — Estonia, Slovenia, and Germany — over how the BGI tests were sold and used.

BGI Under Scrutiny In Europe

BGI has denied that it operates in connection with the Chinese military. During their reporting, Reuters found no evidence that the company violated privacy agreements or data regulations, saying that it obtains signed consent and destroys samples and data overseas after five years.

The BGI Group’s building in Beijing

A review of more than 100 public documents by Reuters, however, did show that BGI had worked with Chinese military hospitals to study the genomes of fetuses since 2010 and had published more than a dozen joint studies with military researchers to trial and improve its prenatal tests .

Reuters also found that the test’s privacy policy says data collected can be shared when it is “directly relevant to national security or national defense security” in China.

BGI has said publicly that it has “never been asked to provide — nor provided — data from its [prenatal] tests to Chinese authorities for national security or national defense purposes.”

The concerns about the company’s collaboration with the Chinese military and the collecting of information from millions of people around the world are what prompted the ongoing investigations in the EU.

The Slovenian Commissioner for Information, which oversees the protection of personal data, told RFE/RL that it was unable to provide details on an active case. But it did confirm that the Slovenian company GenePlanet, which cooperates with BGI and uses their prenatal tests, was being investigated over “suspicion of data processing without an appropriate legal basis and provision of inadequate (insufficient and misleading) information to individuals about the processing of their genetic data.”

In Estonia, a local company that sent its tests to a laboratory using BGI technology was investigated in 2021 following the Reuters findings.

The Estonian Data Protection Inspectorate told RFE/RL that the local company cooperated fully with their investigation and that they found data compiled from the tests is saved according to proper procedure. “The company has corrected other deficiencies in its privacy policy and confirmed that test-related data is stored in the European Economic Area. As a result, we have suspended monitoring of that company,” the Inspectorate said.

The Commissioner for Data Protection in Hesse, the German state where the prenatal tests were manufactured for Germany, did not respond to RFE/RL’s request for comment.

The BGI case, however, was outlined by the German Federal Data Protection Authority in its annual report for 2021. The report said the Commissioner for Data Protection in Hesse launched an investigation into data protection procedures and that the German company that manufactures the tests agreed not to send any samples to a BGI laboratory in Hong Kong until the investigation is closed.

A Focus On The Future

Beyond issues of privacy, genetic data and critical technologies such as artificial intelligence, quantum computing, and semiconductors are part of a complicated new frontier that could shape the economies of the future.

Beijing believes that dominating these fields will give it an economic edge in the future. US companies are also investing heavily in the technologies.

Serbian Prime Minister Ana Brnabic (center) and Chinese Ambassador Chen Bo at the opening of the Genome Sequencing Center in Belgrade in 2021.

US officials have taken aim in recent years at Chinese companies, accusing them of collecting medical and genetic data around the globe as part of an effort to develop the world’s largest bio-database.

The Pentagon also blacklisted BGI and 12 other Chinese companies in October over their suspected links to the Chinese military. “The department is determined to highlight and counter the People’s Republic of China’s military-civil fusion strategy,” it said in a statements.

The country that builds the best database of information will have an edge in stopping pandemics and developing cures for diseases, according to experts, as well as an advantage in the biotechnologies of the future that could also have military applications.

Beijing has also been accused of misusing genetic data. A 2019 report by The New York Times Documented how Chinese authorities used genetic tests to track Uyghurs, the predominantly Muslim minority group that has been repressed by Beijing and faced internment camps, forced sterilization, and other human rights violations.

Those concerns have continued to follow BGI as it deepens its footprint in Serbia.

The Chinese company told RFE/RL that it did not have access to the data processed at the Genome Sequencing Center in Belgrade and that there was no agreement between it and the center for sharing genetic data obtained from testing.

Serbian authorities also told RFE/RL that all data gathered at the center, including results from prenatal screenings, was only stored at a government data center in Kragujevac, a city about 100 kilometers south of Belgrade.