US pressures Serbia and Kosovo in effort to stop ‘violence metastasising’ 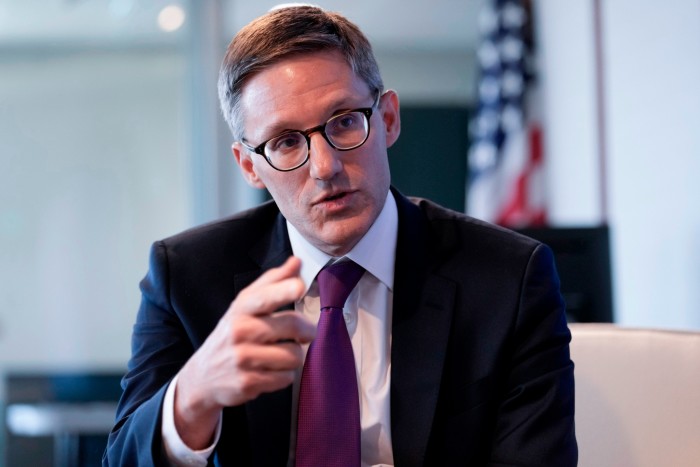 The US is ramping up diplomatic pressure on Serbia and Kosovo to prevent “violence metastasising” after a recent flare-up in a region where Russia still wields influence, according to a senior official.

In December, Serbs living in Kosovo erected barricades and prompted border closures after Pristina required them to replace Serbia-issued license plates and IDs. That stand-off sparked concerns in Washington and Brussels about Europe potentially facing a new security threat at a time when the continent is consumed with Russia’s invasion of Ukraine.

“We were worried about metastasizing violence. . . The last thing any of us wants right now is a crisis in this part of the world given that we have the biggest crisis since the second world was not too far away,” state department official Derek Chollet told the Financial Times on Wednesday.

Chollet, the highest-ranking US diplomat to visit the region in several years, described the December events as “sobering for many”, in a rare admission about the limitations of Washington’s decades-long diplomatic efforts in the region.

The Kosovo-Serbia conflict has festered for more than 20 years, in the wake of the violent break-up of former Yugoslavia. Pristina unilaterally broke away in 2008 and declared independence — something the US and most EU countries have recognized. Serbia, however, says it will never recognize its former province as independent — a view shared by the ethnic Serb community living in the north of Kosovo.

“We don’t want to be in a crisis diplomacy. First, license plates, then barricades, we don’t want anything else next week,” Chollet said.

He said there was a rare window of opportunity as both capitals had agreed to put aside the car plates issue. Belgrade and Pristina could begin to hammer out an agreement based on a plan presented by France and Germany, which would mandate mutual respect for jurisdictions and a common aspiration for EU membership.

“I think there is a middle ground that we can achieve, otherwise we wouldn’t be investing in this in the way we have,” he said, adding that he believed a deal was feasible, although he declined to put a timeframe on that .

US state department official Derek Chollet said: ‘I think there is a middle ground that we can achieve, otherwise we wouldn’t be investing in this in the way we have’ © Sakchai Lalit/AP

Chollet — who as a young diplomat accompanied peace envoy Richard Holbrooke on his 1990s missions to the Balkans, including to Kosovo — described a step-by-step approach as a potential way forward.

Step one would be for Serbia and Kosovo to normalize relations even without fully recognizing each other, the way other countries have done.

“At least as an initial step, that is a way to put Kosovo on the EuroAtlantic path that we want to see it on.”

To achieve that, both sides would have to show willingness to compromise, Chollet said. While Serbs will eventually have to accept some level of sovereignty, Kosovo must give its ethnic Serb citizens greater autonomy, in particular a formal association for Serb-majority municipalities in the north of the country. On the latter, he said he told Kosovo prime minister Albin Kurti on Wednesday that there was a “great urgency” to set it up. “They understand the importance of that,” Chollet added.

The US is well aware of the disruptive role of Russia, which has repeatedly declared its support for its Slavic ally Serbia, Chollet said. The issue has come under a stark new light as Serbia, long dependent on Russian energy, has begun to diversify its energy sources and reduce that reliance. That has left the Kosovo issue as the last leverage Moscow has over Belgrade, an aspect not lost on Washington.

“A reason why we want to find agreement between Kosovo and Serbia is to take away that leverage by Russia,” Chollet said. “I don’t think we should overstate that leverage . . . It’s real but I confess it’s not driving why we’re doing this.” A roadblock in the northern part of the ethnically divided city of Mitrovica, Kosovo, last month © Florion Goga/Reuters

Chollet went to Belgrade on Thursday where he met President Aleksandar Vučić, and other politicians, in a bid to raise awareness about both Russian misinformation and efforts to weaponise energy ties.

The US wanted to develop relations with Serbia, Chollet said, despite memories of Nato planes bombing Belgrade in 1999 still simmering in the consciousness of both sides. While Kosovo named boulevards after former US president Bill Clinton and sells “thank you, Nato” fridge magnets at Pristina airport, Serbia has deeply resented and mistrusted the west ever since.

“That is a very different history than with Kosovo, but that’s the approach,” Chollet said.

US officials, along with the German government, have in recent months stepped up pressure on the EU to accelerate the accession process to the bloc of western Balkan nations, including Serbia and Kosovo. Washington argues that confidence in this process gives governments in the region an incentive to remain aligned with western values, and that the slow pace of integration has contributed to instability in recent years.

“Europe can do much more, and we are asking for it,” said a senior US official. “The [EU] enlargement process hasn’t inspired confidence . . . but the idea of ​​Europe still does.”