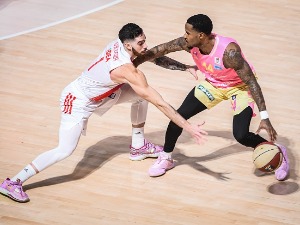 The basketball players of Crvena zvezda convincingly defeated Mega in the “Aleksandar Nikolić” Hall and recorded their ninth triumph in the regional ABA league.

They controlled the red and white score throughout the entire match, but Mega stayed behind by a decent 10 to 15 points, until the last quarter, when the Zvezda hoop players locked up the hoop, conceded only seven, and scored 30 points.

The hot red-white match ended with 13 hit three-pointers from 25 attempts (52 percent success rate), and they hit the first four in the first five minutes of basketball (three by Dobrić and one by Vildos).

The Mega basketball players countered in the attack, kept the scoring connection at the very beginning of the match, but with another three-pointer by Vildosa and tied points by Petrusheva, Zvezda made the series 7:0 and escaped to 21:12 before the end of the first quarter.

Kazalon answered with four free throws, but then Nedovic hit his first and Zvezda’s sixth three-pointer from seven attempts in the first quarter. By the end of the period, only Luka Mitrović scored another point from the penalty line and Zvezda led 25:16.

Dusko Ivanovic’s basketball players opened the second quarter with a 9:2 series and for the first time in the match they gained a double-digit advantage, which they lost only a couple of times until the end of the match.

The closest Mega came was seven points behind after Dragan Milosavljevic’s first triple in the middle of the third period, but the red and whites regained a double-digit advantage by the beginning of the last quarter, which grew rapidly in the last 10 minutes to the final 92:58.

Zvezda coach Duško Ivanović managed to rest some players, and John Holland and Ognjen Kuzmic remained outside the protocol, so that Dalibor Ilić and Nikola Topić could get a chance.

The most effective in the winning team were Ognjen Dobrić and Nemanja Nedović with 16 points each, Luka Vildosa added 12, while Filip Petrushev had 11.

The best among Mega players was Croatian center Danko Branković with 13 points, the only one in double figures in the defeated team. Nikola Đurišić added nine and Aleksa Uskoković eight points.