A brand new blow for Liverpool, the “reds” misplaced in Brentford 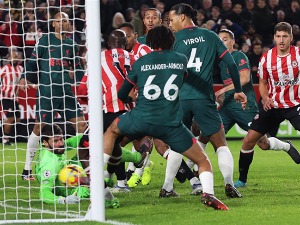 Brentford’s victory over one of the best teams in England is no longer a surprise for anyone, and Thomas Franco’s team dealt Liverpool a new blow in the fight for a place in the Champions League.

Although they played without their captain and best player Ivan Toni, the “bees” played another outstanding match and convincingly defeated the vice-champion of England.

In the first half, the home team gained a two-goal advantage – first, Konate scored an own goal, and at the end of the first half, Vis brought great joy to the fans at the stadium in the suburbs of London.

When Alex Oxlade-Chamberlain reduced the score to 2:1 at the start of the second half, it seemed that Jurgen Klopp’s team could turn it around, but Brentford’s defense worked flawlessly.

Muhammad Salah did not get into the scorers’ list again, while Darwin Nunez’s goal was disallowed for offside – too little for the team that was one of the main contenders for the championship trophy at the beginning of the season.

At the end of the game, Cameroonian Brian Mbeumo took advantage of one of his team’s counterattacks and confirmed the victory of Brentford, who reached their sixth triumph in the competition and seventh place in the table.

Liverpool was defeated for the fifth time in the season, so it is currently sixth, with two points more than today’s rival.

Data Caps Coming for Starlink in Serbia – What Does That Mean for Your Internet? – Serbian Monitor