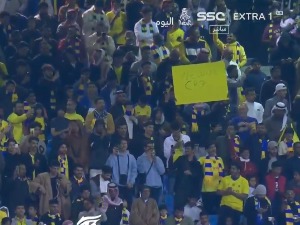 Ronaldo recently signed a contract with Al Nasr, the club made the cooperation with the football star official two days ago on social media..

Al Nasr played the first game since the official announcement that Ronaldo is the club’s new player.

Vincent Abubakar scored the only goal of the 11th round match of the Saudi Arabian Premier League in the fifth minute to give Al Nasr a momentous victory that took the Riyadh club to the top of the table.

Despite the early lead, Al Nasr fans only had one player on their minds.

Cries of “Ronaldo” and his authentic sound after the scored goal “siu” echoed through the stadium.

After signing the contract, Ronaldo pointed out that he had achieved what he set out to do with United, Real Madrid and Juventus and that at this moment he wants to try himself in Asia, and he called Al Nasr’s vision very inspiring.