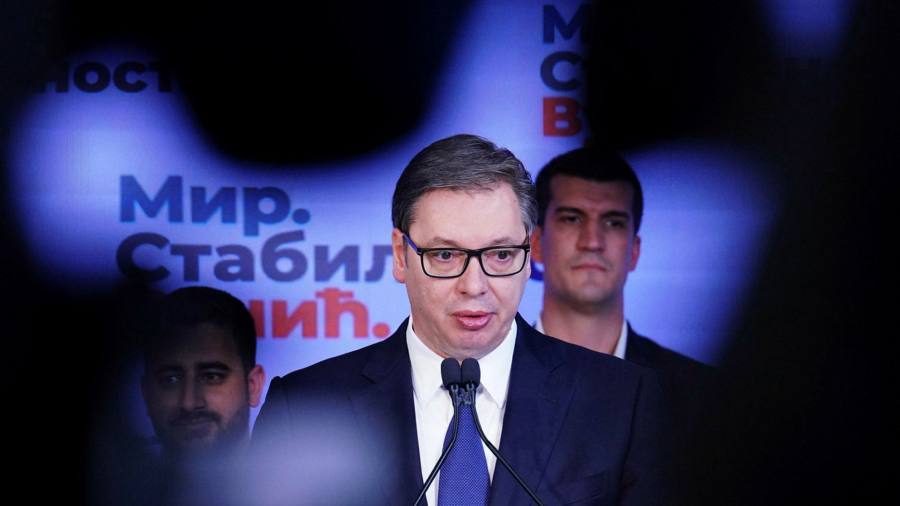 Serbia’s president Aleksandar Vucic was on track for re-election on Sunday, with his Serbian Progressive party (SNS) set to receive the largest portion of the votes in a performance that would allow the populist conservative leader to consolidate power in a second term.

Pollsters Ipsos and CESID predicted that Vucic would garner almost 60 per cent of the vote after a relatively high turnout, with the official result expected in the coming days. If confirmed, Vucic would avoid a run-off for a second consecutive election.

“A huge thank you to the citizens of Serbia,” he said. “I’m endlessly proud and endlessly happy . . . I believe in a significant and convincing victory and I believe everyone will get what they deserve.”

Vucic, a former ultranationalist who rose to prominence as propaganda minister under former Serbian leader Slobodan Milosevic, has campaigned on a message of stability following the invasion of Ukraine by Russia, Serbia’s traditional ally.

He has come under strong international pressure over his resistance to joining sanctions against Russia, which made him one of the few European leaders to refrain from doing so.

Vucic is not expected to change course dramatically on that stance given a significant proportion of his voters sympathize with Russian president Vladimir Putin’s campaign against Kyiv and resent the west, which bombed Belgrade during the Yugoslav wars in 1999.

“Regarding Russia sanctions, a quick about-turn seems unlikely,” said Milos Damjanovic, an analyst at the BIRN consultancy in Belgrade. “Vucic will seek to play for time and avoid aligning with sanctions on Russia for as long as possible, hoping that the war in Ukraine ends or grinds to a halt.”

How long Vucic can sustain that policy will also depend on whether the EU and the US tolerate Belgrade’s non-alignment on sanctions, Damjanovic said, adding that western displeasure would run up against Serbian public opinion and the country’s dependence on Russian energy.

Russian companies own the majority of Serbia’s energy sector, its largest gas storage facility, and control the country’s supply of gas via the new TurkStream pipeline. Serbia’s long-term gas supply agreement will have to be renegotiated by July.

Vucic also wants benefit from the victory of his close ally, Hungarian premier Viktor Orban, who won re-election on Sunday.

“Vucic will certainly be pleased with Orban’s victory, given that the Hungarian leader has been a strong backer of Vucic and Serbia within the EU,” Damjanovic said.

Before the Ukraine was superseded by other issues, Serbians had protested against Vucic in a ballooning series of demonstrations over inadequate environmental protections and perceived leniency towards multinational companies, forcing Vucic into a U-turn on a lithium mine that was one of the country’s largest investment projects .