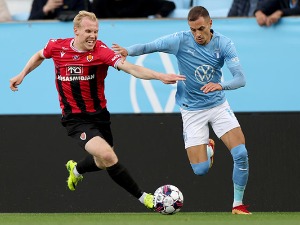 Sweden’s Malmo recorded a triumph in the first game of the first round of Champions League qualification, defeating Iceland’s Vikingur 3:2.

Malmo was a big favorite before this duel, but in the end it recorded a minimal victory before the rematch in Iceland.

The home team took the lead through Olsen, but Ingason equalized for Vikingur in the 38th minute. Malmo took the lead again through Toivonen at the end of the first half, and then Veljko Birmančević, a member of the Serbian national team, scored a two-goal lead.

However, Gudjonsson gave the “Vikings” the hope that they could pull off a surprise in the rematch in the last moments of the match.

Ludogorets defeated the Sutjeska team 2:0 on their home field in Razgrad and gained a nice advantage before the rematch in Montenegro.

Both goals were scored in the second half, and Santana and Tisera brought victory to Anto Šimudža’s team.

Macedonian Skupi was convincing against Gibraltarian Lincoln 3:0, and the goals were scored by Danfa and Adetunji, while the final result was set by Cippolina with an own goal.

On Tuesday, seven more duels of the first round will be played, and the return matches are scheduled for the following week.

Results of the first qualifying round for the Champions League: