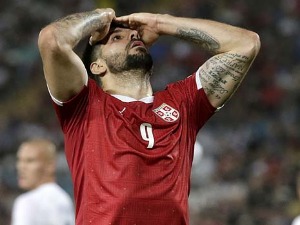 On it, the goalscorer of Fulham and the Serbian national team is depicted kicking the ball in flight, in a recognizable way, with his head.

The former Partizan football player symbolically resembles an eagle, which is a clear connection with the national team led from the bench by coach Dragan Stojković Pixi.

Aleksandar Mitrović is the best scorer in the history of the Serbian national team with 46 goals in 76 games, and Serbian fans will remember his goal in Lisbon for the triumph over Portugal (2:1) with which the “eagles” won direct qualification to the World Cup in Qatar.

The popular Mitrogol recently got a mural in his native Smederevo, on the field where he started playing football.