The fury of Ian doesn’t cease, the tropical storm grows right into a hurricane once more 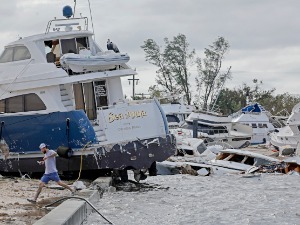 The US National Hurricane Center (NHC) warned of a maximum wind speed of 112 kilometers per hour, making Ian close to hurricane strength.

The storm is moving north, and the NHC predicts it will make landfall in South Carolina on Friday as a Category 1 hurricane.

In view of the forecast, a hurricane warning has been issued for the entire coast of South Carolina from the Savannah River to Little River Inlet.

Currently, the tropical storm’s winds are located in an area of ​​about 600 miles, stretching from West Palm Beach, Florida to Myrtle Beach, South Carolina.

Hurricane Ian, which at its peak reached the status of a category four storm, caused floods and storm surges in Florida, and two million people were left without electricity. The hurricane then weakened and is now moving inland as a Category 1 storm.

It is previous Cuba was completely without power after Ian hit the western part of the islandand 11 million people remained in the dark, the government of that Caribbean country announced.

Apart from the destructive power, Ian shares another similarity with many previous devastating storms and hurricanes – same initial letter.