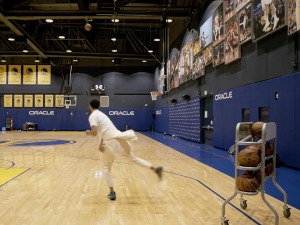 A few days ago, a video appeared on which the basketball player Curry, the playmaker of the Golden State Warriors, hit five shots from one end of the court to the other..

After a video of Curry hitting baskets that was seen by just over 100 million people in a short period of time, doubts have been raised about the validity of the video, followed by a new long-angle shot that points to the authenticity of the shots.

In the press conference following the Warriors’ loss to the Pacers on Monday night, reporters questioned Curry about the veracity of the tape.

“We had a little fun with it, the footage was edited,” Curry said.

In response, he joked by asking the journalists: “No one believes that I scored five goals in a row over the entire field?”

“I’ll let people make their own judgments, but it’s a huge compliment to be in awe of that accomplishment, don’t think it’s weird that it can be real,” Curry told reporters.

A day after the edited video went viral, Curry had one of his worst games of the season.

Namely, he finished the match against Indiana with 12 points on 3-of-17 shooting from the field and 2-of-10 three-point shooting.