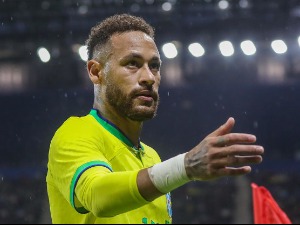 Paris Saint-Germain striker he recorded a video in which he sings along to Bolsonaro’s jingle and shows a “V” sign with both hands to indicate 22, the number of Bolsonaro’s party on electronic ballots.

Bolsonaro, the Guardian reports, is trailing in the polls and could face a humiliating defeat in the first round when 156 million Brazilians go to the polls on Sunday.

If no candidate wins a majority in the first round, a second round will be held on October 30.

Neymar’s support for the far-right leader came a day after Bolsonaro visited Neymar’s institute in Santos, the city where he made his name as a youth player before playing for Barcelona.

Neymar was not present but welcomed Bolsonaro to the charity by phone.

Since then, other players have supported the president, who is named after Jair da Rosa Pinto, a legendary Brazilian player of the 1940s and 50s.

In the campaign four years ago, he used national symbols such as the flag, the anthem and the famous yellow jersey of Brazil.

In recent months, however, there has been a campaign to “take away” the jersey from the far right ahead of the World Cup in November.

That question is unsettling for many who grew up watching Pele, Socrates, Ronaldo and Marta wear the jerseys as a symbol of Brazil’s soft power.

Now 20 percent of Brazilians said they would not wear the Brazilian jersey today for political reasons, according to a recent study by the Ibmec University Sports Administration League.

Another sign of the polarization surrounding the clothing came when Nike launched a new Brazil kit this year, with the manufacturers not allowing customers to put Bolsonaro’s or Lula’s name on the back.

Neymar himself admitted earlier this year that the national team is no longer loved as it used to be.