Low opening and particular tools, coaching of members of the 63rd Parachute Brigade in evening situations 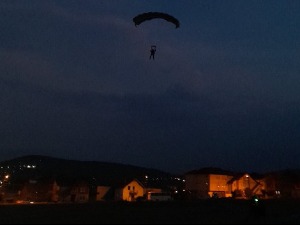 The jumps were carried out from Mi-8 helicopters of the Air Force and Air Defense Forces, using the technique of high jumping and low opening, with the use of special wing-type parachutes, which enable precise landing on inaccessible terrain, the Ministry of Defense announced.

The training of the combat teams of the 63rd Parachute Brigade in night conditions was attended by the Chief of the General Staff of the Serbian Army, General Milan Mojsilović.

As stated in the announcement, General Mojsilović convinced himself on this occasion that the professional composition of the unit is exceptionally qualified for the realization of free-action parachute jumps with equipment and weapons and the execution of combat operations after a helicopter landing.

Night jumps from different types of aircraft represent one of the most important segments of advanced parachute training, which is carried out with the aim of training and checking the ability of the special teams of the 63rd Parachute Brigade to perform combat tasks and apply vertical maneuvers in night conditions and on unknown terrain, while achieving the surprise factor .

The continuous implementation of complex combat training in all weather and terrain conditions ensures the highest level of competence and psychophysical preparedness of the members of the 63rd Parachute Brigade and improves the overall ability of this elite unit of the Serbian Army to perform special combat activities and operations of special importance, the Ministry of Defense announced.