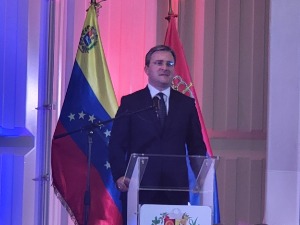 Selaković conveyed the greetings of Serbian President Aleksandar Vučić to his Venezuelan colleague, the Ministry of Foreign Affairs announced.

The interlocutors discussed the further strengthening of traditionally friendly relations between Serbia and Venezuela.

Selaković emphasized the importance of the Serbian Foreign Minister’s visit to Venezuela after 12 years, especially considering that it is being realized in the year when our two countries are marking 140 years since the establishment of diplomatic relations.

The head of Serbian diplomacy thanked President Maduro for the firm and principled position of Venezuela regarding the territorial integrity and sovereignty of Serbia and the unequivocal and unconditional support that this country provides us in international organizations on issues of the highest national importance.

He also pointed out that mutual respect for the principles of international law, non-interference in the internal affairs of states and the right to sovereign politics, as well as the mutual support of our states is not new, but stems from cooperation in the Non-Aligned Movement, thanking President Maduro for the participation of the Minister of Foreign Affairs. of Venezuelan affairs at the PNZ Commemorative Meeting, held last October in Belgrade.

The interlocutors exchanged opinions on current regional and global issues, as well as ways to face those challenges, while safeguarding their national interests.

Selaković noted that economic relations do not follow excellent political ones, expressing the expectation that this visit and signed agreements will be significant for the improvement of economic cooperation between the two countries, as well as cooperation in all areas of mutual interest.

At the press conference, Selaković expressed his satisfaction that after 12 years the Minister of Foreign Affairs of Serbia is visiting Venezuela, especially due to the fact that this visit was realized in the year in which we celebrate 140 years since the establishment of diplomatic relations.

“During the long history of our diplomatic relations, despite the pressures in different historical periods, we managed to preserve a high degree of mutual respect and appreciation on issues of key national interests,” said Selaković, recalling that such mutual respect dates back to the Non-Aligned Movement.

The head of Serbian diplomacy underlined that Serbia is particularly grateful for Venezuela’s consistent support for Serbia’s positions on the issue of Kosovo and Metohija, which for us is an issue of first-class national importance.

“Non-interference in the internal affairs of states, preservation of sovereignty and territorial integrity, the right to a sovereign policy and respect for international law, not the “right of the stronger”, remain the basic principles of conducting our state policy,” Selaković said.

Selaković indicated that he and his Venezuelan colleague discussed issues of essential importance for both countries, that ways of strengthening cooperation in the fields of economy and tourism were discussed, but also that they discussed current regional and global situations.

Selaković particularly expressed his satisfaction that several very important agreements were signed, expressing the hope that these agreements will enable our two states and peoples to be further connected.

“And as Hugo Chávez once said – We will not create the great future we are looking for, if we do not know the great past we had – so the foundation of our future relations, which we continue to build today, will be our friendly cooperation during all these 140 years of diplomatic relations”, concluded Selaković’s address.