“Block the hatred. Share the love!” campaign presented in Serbia 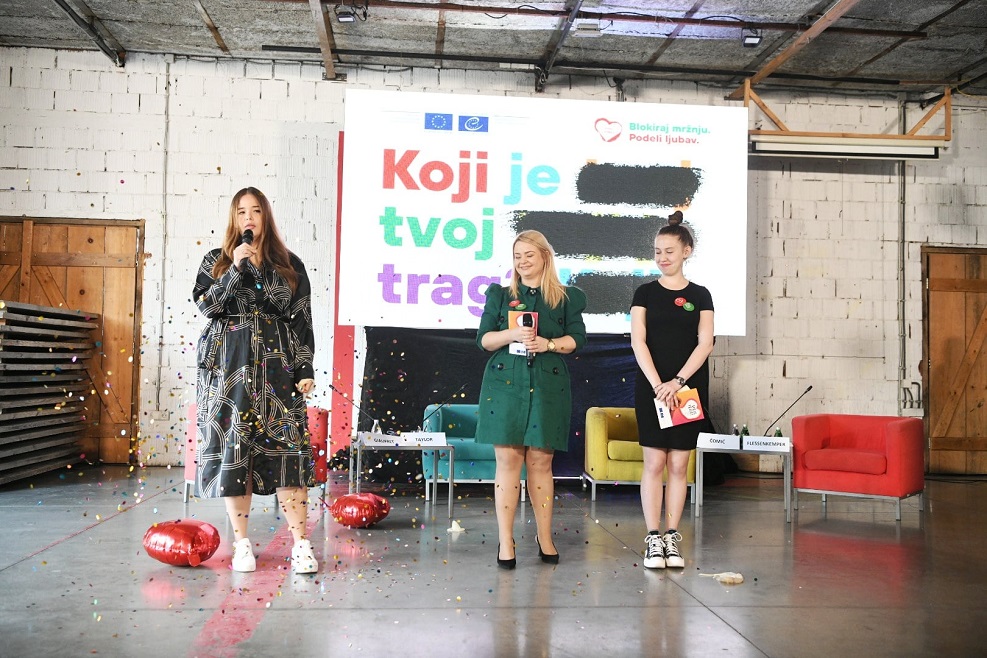 WHAT TRACE DO YOU LEAVE BEHIND, COMMUNICATING TO OTHERS? IS IT A TRACE FULL OF LOVE AND COMPASSION OR THAT OF HATRED?

Every individual has an important role in responding to hate speech with positive language and mutual respect. This was one of the key messages at the launching event of the joint awareness raising campaign of the European Union and the Council of Europe, “Block the hatred. Share the love!”, held today in Belgrade.

The campaign “Block the hatred. Share the love!” aims to combat various forms of hate speech targeting certain communities and individuals in Serbia, especially those from vulnerable groups and various minorities.

“This is the right time for everyone in Serbia to block the hatred and share the love”, said Tobias Flessenkemper, Head of the Council of Europe Office in Belgrade in his welcoming remarks. “As we are marking the 73rd anniversary of the creation of the Council of Europe today, we want to remind that respect for diversity and equality are true conditions for European unity and a vibrant democracy, and this is what our campaign supports.”

Online hate speech has become particularly widespread, as the Internet allows expressing one’s opinion freely and creates a false impression that things and comments written online are ephemeral. However, every trace we leave online adds to shaping the perception of others about us, every ugly word leaves a mark.

Verena Taylor, Director of the Office of the Directorate General of Programs of the Council of Europe, invited participants to join this campaign. “To promote the values ​​of the Council of Europe and the EU share, it only takes a very simple action: using respectful language, instead of posting and sharing hateful material on social media. If we begin with these small steps, together, we’ll achieve a lot,” said Taylor.

Each of us can become a target of hate speech, no matter which social group we belong to, but that it certainly affects the most vulnerable – women, minorities, people with disabilities – the most.

HE Emanuele Giaufret, Ambassador and Head of the Delegation of European Union to the Republic of Serbia stated: “Just because it comes through words, hate speech is no lesser of an attack and bears no fewer consequences. In words or in pictures, online or offline, it is still a form of assault, aggression and unjustifiable act against human rights and freedom. It hurts people, it causes deep human suffering and can easily lead to fatal outcomes. It is nevertheless a daily reality worldwide, speeded up by the online sphere, which requires strong joint efforts of both institutions and individuals to combat it. Serbia is not immune to such reality either with hate speech and discriminatory terminology often used and tolerated in the media and rarely tackled by regulatory authorities or prosecutors, as noted in the previous progress report. This phenomenon is a battle we need to fight together, a battle where every individual can make a tremendous impact. As a step in this direction, the European Commission together with Facebook, Twitter, YouTube and Microsoft, revealed in 2016 the “Code of conduct on countering illegal hate speech online”.

This action will advocate for the protection of human rights as the fundamental value of every state.

“Hate speech is not free speech. That is exactly the reason why we have been active in passing amendments to the Law on Prohibition of Discrimination and passing the Law on Gender Equality and other laws that regulate hate speech. This campaign and all the laws that Serbia has passed are a great contribution to building a culture of human rights in Serbia, and how successful we will be in it depends on all of us,” said Gordana Čomić, Minister for Human and Minority Rights and Social Dialogue of the Republic of Serbia.

Campaign “Block the hatred. Share the love!” will be implemented online, through social media pages (Facebook; Instagram; Twitter), as well as through public events. These activities will involve prominent public figures, institutions, and activists, who will promote diversity and equality in Serbia and the region through personal experiences, testimonies and exchange of good practices.

Ambassadors of the campaign against hate speech in Serbia are prominent public figures in the world of acting: Milena Radulovic, Sandra Siladjev, Milos Timotijevic and Slaven Doslo. So, this campaign was supported by young European ambassadors. All of them backed the campaign because they believe that together we can make a positive change and render our society more inclusive.

The campaign is implemented within the action “Promotion of diversity and equality in Serbia”, that is a part of joint European Union and Council of Europe program “Horizontal Facility for the Western Balkans and Turkey 2019-2022”. This program supports key local actors and beneficiary institutions in Serbia and the Western Balkans in the fight against discrimination, hate speech and hate crimes directed against minorities, LGBTI people and other vulnerable groups of the Serbian society.