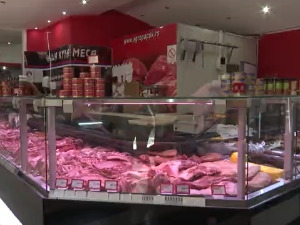 The dizzying growth of meat prices temporarily stopped new decision of the Government. As of this morning, pork, thigh, shoulder, neck and sternum are on average 200 dinars cheaper per kilogram. Corrected prices have also reached butchers.

“Today, we had to adjust prices in our butcher’s shop, such as the price for a pork shoulder. Now it is 699 dinars, and it was 789. The only problem with us right now is that the price of the live scale remains the same as it was before. of this price reduction. We don’t know what will cause these price reductions,” says Marijana Marković, butcher of “Izgubljeno jagnje” in Jagodina.

Bratislav Bogatić from “Agropapak” points out that it is evident that the sale of meat has dropped by about thirty percent.

“The reason is that the meat was too expensive for sale, which means that it was not only farmers who produced it, I think that it was far more produced by sales facilities, retail chains. Normally, we now make losses on those four items on fresh meat, but that is not decisive “, adds Bogatić.

The Ministry clarifies – the price of the discount will be paid by traders for both pork and chicken, their margin, at least temporarily, must not exceed 10 percent.

“The decision to limit pork prices and margins for trade chains was made solely for the protection of consumers. Pig producers will not suffer economic damage due to this measure, but trade chains will still have a positive balance in their operations, albeit with lower earnings. Due to the rise in raw material prices, limiting margins in order to protect consumers is a necessary step and trade chains will have to take on part of the burden, because stable supply is a priority for the state,” says the Ministry of Agriculture.

The price of five basic foodstuffs was capped for the first time in November. So far, the deadline has been extended several times, and the list has been expanded. There is no indication when the prices could be left to the market.