Farmers are ready for written ensures, they’ll spend the night time in entrance of the Provincial Authorities 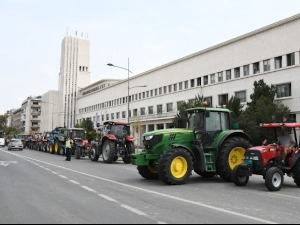 In front of the Provincial Government building in Novi Sad, the farmers will remain during the night, even though Minister Branimir Nedimović promised them a series of measures and announced a meeting in the Government in two days.

As portal 021 reports, farmers dissatisfied with the low purchase price of sunflowers asked the minister for written guarantees that the promises would be fulfilled and decided to continue with the protest.

They expect that by 9 o’clock in the morning they will receive in writing everything that the minister promised.

Among other things, Nedimović promised farmers that they will be able to fill fuel twice a day with special cards. A decision on fuel allowances should be made within the next 60 hours, according to 021.

The minister also promised a meeting with Prime Minister Ana Brnabić in the next 48 hours and stated that they will discuss autumn sowing and prices.

There was also a protest on the Đerdap highway, and the RTS correspondent from Požarevac reports that when it got dark, the farmers with 250 tractors left after the all-day protest.

The informal agreement with the competent ministry is to remove the restriction on oil exports in the morning, and that at the session on Thursday, the Government of Serbia will increase the price of oil on the shelves and guarantee the purchase price of sunflowers from 700 euros per ton, reports the RTS correspondent.

Otherwise, farmers from the association “Stig” Pozarevac say they will join the protests in Belgrade.

Farmers dissatisfied with the purchase price of sunflowers, but also with the export ban, protested in several cities throughout Serbia, and some roads were blocked.

The Ministry of Agriculture says that the minister and his assistants spoke with farmers in Novi Sad, Pančevo and Požarevac, that the next steps to solve the problem were agreed upon, and that all additional issues will be discussed at a meeting in the Government of Serbia, which will be held in the next 48 hours.