Corriere d’italia (1913) / Interview with Isa Boletini: “If Shkodra and Ioannina were given to the allies, I would feel the same pain that the Italians would feel if Rome surrendered” – Latest News “La Stampa” published, on Friday, April 4, 1913, on page n ° 2, the interview of Isa Boletini with the newspaper “Corriere d’Italia”, which, Aurenc Bebja, through the Blog Dars (Klos), Mat – Albania “, Has brought it to the Albanian public: 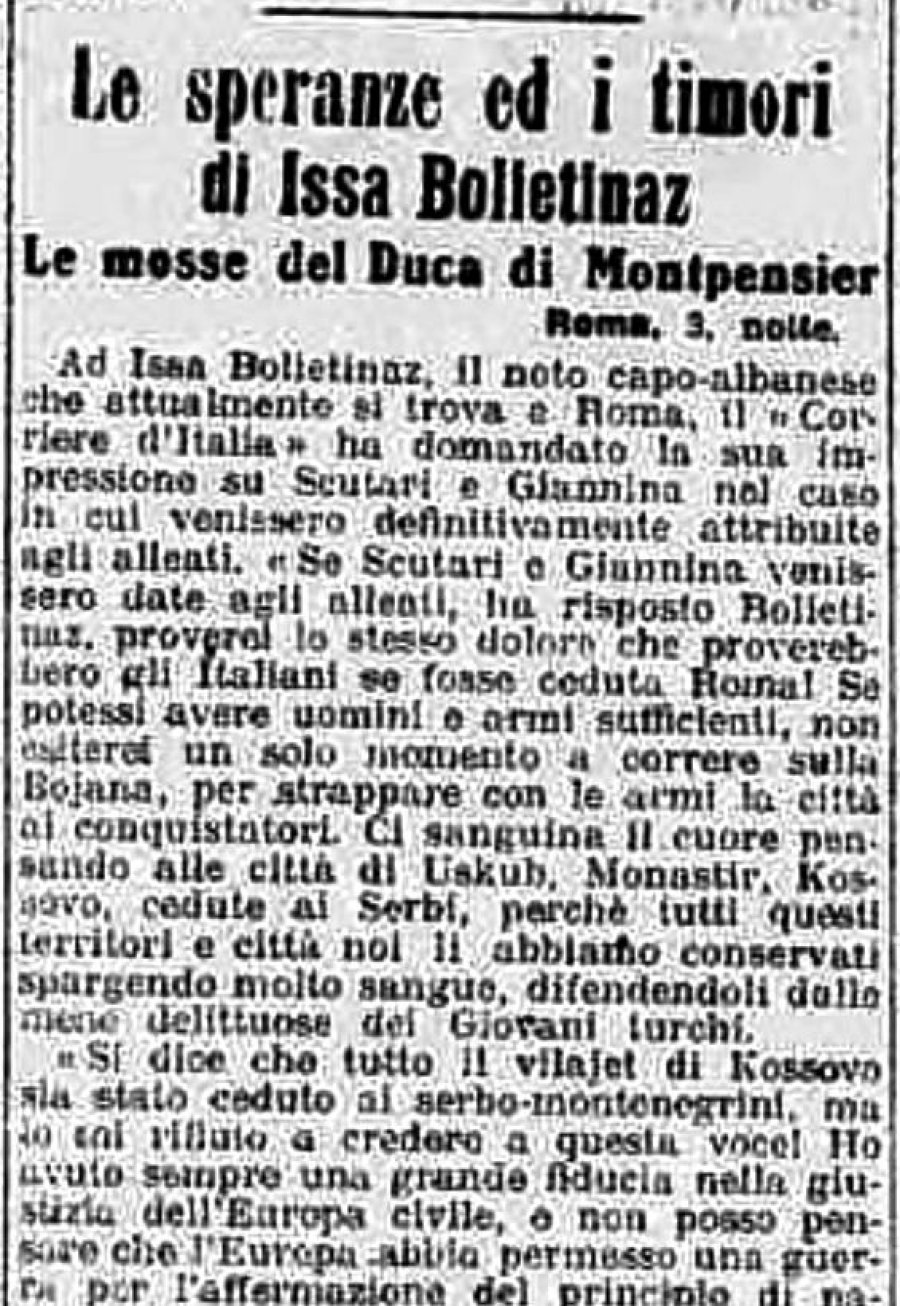 “Corriere d’Italia” asked Isa Boletini, the well-known Albanian leader who is currently in Rome, his impression of Shkodra and Ioannina in case they were finally attributed (given) to the allies.

“If Shkodra and Ioannina were given to the allies,” Boletini replied, “I would feel the same pain that the Italians would feel if Rome surrendered!” If I had enough people and weapons, I would not hesitate for a moment to run over Buna, to seize the city with weapons from the invaders. I am heartbroken when I think of the city of Skopje, Bitola, Kosovo, given to Serbs, because we have preserved all these territories and cities by shedding a lot of blood, protecting them from the criminal acts of the Young Turks. “

“It is said that the entire vilayet of Kosovo was handed over to the Serbo-Montenegrins, but you know that I refuse to believe this voice! I have always had a great belief in the justice of civilized Europe and I can not think that Europe has allowed a war to assert the principle of nationality, and then I have to accept an epilogue that comes to annihilate our nationality, that through many events we have been able to affirm and maintain. Then there is the issue of religion: Catholics and Muslims are united to fight for the same principle. The organization of today’s Albania deprives us of our sacred right and deprives us of the benefit of peace. “For this we would have preferred the Turkish yoke, which, if nothing else, has allowed us to continue with some freedom.”

– For what purpose did you come to Italy?

“Although I know that my person does not have a necessary importance on a political scale, nevertheless I have come here and I will go to European capitals together with Ismail Qemal Beun to witness to Europe my highest protest for its decision. , and to give a concrete example of the evil that has been done, leaving another million and a half Albanians in foreign hands. “

“Albanians are not Slavicized, nor are they Slavicizable. I have come to shout in Europe that no Albanian will recognize the division of Albania in peace. I came to declare that, if this division is final, my brothers and I will take up arms to defend the integrity of our country and it will be a fierce, relentless war in which all arms will be mira. The right of occupation is a title of dubious truth. I myself, who for five years was the lord of the vilayet of Kosovo and during the last uprising made a triumphant entry into Skopje and caused the surrender of the Young Turks, I could declare myself the prince of that vilayet. We will have to see how things will be resolved and then make a decision … ”/ darsiani