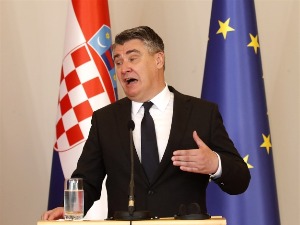 The purchase of weapons, he said, is decided by the one with the treasury and added that he had been warning Prime Minister Andrej Plenković about this since last year, and that, as he said, he did not even blink and did not respond to him “neither with a letter nor a postcard “.

That’s why he called Prime Minister Plenković responsible for the situation in the Croatian army, while he said of Defense Minister Mario Banožić that he is “the prime minister’s servant” who does not decide on anything.

Milanović attended the ceremonial academy on the occasion of the 30th anniversary of the establishment of the 7th Guards Brigade “Puma”, where he said that the Armed Forces of the Republic of Croatia lacks a lot.

“Ammunition, armor, grenades, rockets… Empty”, said the Croatian president and added that it will be difficult to make up for it since there is now a war in Ukraine.

He reminded the journalists that the Minister of Defense in his government, Kotromanović, had the idea that, as he said, “we are going to Belgrade in 1995, but that was in 1995.” ships, 200 American trucks came, he is a magician.”

Commenting on the latest statements of the Minister of Foreign and European Affairs, Gordan Grlić Radman, in the context of Altea’s mission in Bosnia and Herzegovina, Milanović referred to the disputed letter of the head of European diplomacy, Josep Borelj, and said that the head of Croatian diplomacy is “an illiterate idiot”.

Regarding the letter from Jozep Borelj to Radman, Milanović said that he will publish it. “He treats us like the 13th pig,” said the Croatian president.

“He (Grlić Radman) is a liar and a whistleblower. Those people live by treating their complexes by lying. That’s how the country is run in vassalage. You don’t have a foreign policy, you beggar, and then this guy rudely rejects you and you say it’s not offensive.” , said Milanović.

He added that Croats are once again chosen by others to represent them. “And we talk about being successful. “No, we are losers!”, said Milanović, after marking the 30th anniversary of the founding of Puma units.