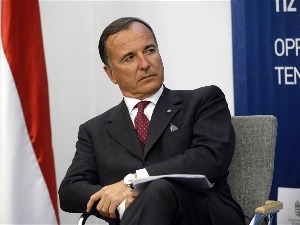 From 1983 he was a lawyer, two years later he became a legal adviser to the Minister of Finance, and from 1990 to 1991 a legal adviser in the Government of the Christian Democrat Giulio Andreotti.

He was also the minister for regional affairs and public affairs in the government of Lambert Dini (1994-1996), and in 1996 he entered the parliament as a candidate of Silvio Berlusconi’s Forza Italia party.

From then until 2001, he was the chairman of the Committee for Oversight of Secret Services, and at the age of 45, he became the youngest Minister of Foreign Affairs in the history of Italy in the second Berlusconi Government in 2002-2004.

He held the position of EU Commissioner for Justice, Freedom and Security from 2004 to 2008, when he was also one of the five vice-presidents of the European Commission.

He returned to the position of Italian foreign minister in 2008, where he remained until 2011, and a year later he left Berlusconi’s party.

Frattini has held the position of president of the Economic Council of Italy since January.