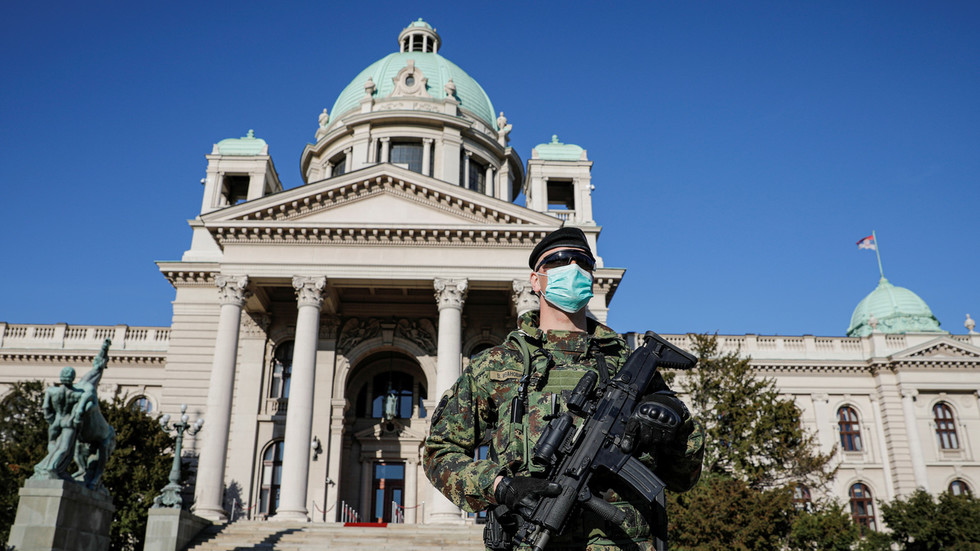 The European Union’s incompetence and hypocrisy in dealing with the Covid-19 outbreak appears to have sobered Serbia, a country that previously slavishly pledged to obey orders from Brussels.

For the past 20 years, every politician who ruled Serbia has subscribed to the dogma that “the EU has no alternative” and that membership in this transnational bloc was in the highest state interest – even if accession was not even far on the horizon and would require, among other things, the abandonment of national identity and territory such as Kosovo.

Then came the novel coronavirus and the EU export ban on medical devices even to obedient vassals like Belgrade, immediately after the Brussels bureaucrats advocated open borders, made Europe the new epicenter of the pandemic. Sure, the doors are slamming now, but for thousands of Italians and Spaniards it is too little, too late.

Serbian President Aleksandar Vucic declared the state of emergency and the national lockdown on Sunday and criticized the “legendary international and European solidarity” as something that “only existed on paper” and stated that he was referring to the “friend and brother” -President Xi Jinping of China turned for assistance, particularly with medical equipment.

“Only China can help us,” said the Serbian head of state, adding that Beijing had already sent five million masks and offered to send doctors. China became the first country to address the disease, which reportedly emerged in Wuhan city in November 2019.

In these difficult moments for Serbia, the first contingent of aid for our country came from the friendly China – tests for the detection of the corona virus. We are grateful to our Chinese friends who have once again shown our steel friendship in action. # Serbia # China # friendshippic.twitter.com / e0t5oxdROw

Foreign Minister Ivica Dacic also sought help with the medical care of his Russian counterpart Sergei Lavrov, who was due to visit Belgrade at the end of April but canceled the trip for obvious reasons. Lavrov is said to have promised that Russia would help Serbia “as always”.

Serbia’s crackdown on the coronavirus is possibly one of the strictest in Europe, enforced by armed and masked military personnel patrolling the streets. Public transport was severely restricted and the entire population was instructed to stay home and only go outside to dispose of rubbish, buy food or medicine, and take pets for walks.

Day care centers, schools and universities are closed until further notice. The parliamentary elections planned for April have been postponed indefinitely. Price controls are in place.

Also on rt.com
There is no European solidarity, only China can help us: Serbia is in need because of the coronavirus

Everyone, including citizens and diplomats, who returns from abroad must undergo a 14-day quarantine. If you are from Switzerland, Iran, Romania, Spain, Germany, France, Austria, Slovenia or Greece, it will take up to 28 days. Violators can be imprisoned for up to three years. Italy isn’t just on the list because it has been completely banned for over a week.

“I say to foreigners: Do not come to Serbia, except for the Chinese who are supposed to come, their doctors, the people who help us,” said Vucic.

On Sunday when he declared the emergency, Serbia had registered 57 cases of the coronavirus, with no deaths and with a recovery. Unsurprisingly, the president’s liberal critics have called the measures far too drastic.

“The virus is too small to be killed by a bullet,” tweeted former Democratic Party leader Bojan Pajtic. He also noted that masked and armed troops sent to enforce the emergency should not hold their finger on the trigger to offer a photo as evidence.

“I hope it is now clear that we have to join the EU as soon as possible!” tweeted former defense minister and democratic colleague Dragan Sutanovac. “The help from China is great and thank you, but we belong to everyone else from Europe in the EU.”

Remember, this is the man who melted down much of the Serbian arsenal during his tenure to make it easier for his Euro-Atlantic masters to bend the knee. Not even a deadly pandemic demonstrating the EU’s hypocrisy and incompetence on a daily basis could shake his cultic devotion.

For the rest of Serbia, but also for much of the world, the Covid-19 crisis will be a sobering experience. It has not only been shown which friends are fair weather and which are true, but also that globalization is hardly inevitable and at the same time has a massive disadvantage.

The statements, views and opinions expressed in this column are solely those of the author and do not necessarily correspond to those of RT.