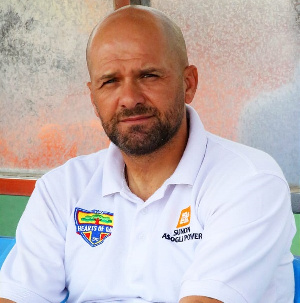 Accra Hearts of Oak head coach, Slavko Matic, has returned from his short holiday in Serbia.

The club via a tweet on Friday, January 13, 2023, announced that Serbia has arrived in Ghana and will resume work immediately.

“Coach Matic is back from Serbia. He is expected to resume work today with the squad. Welcome back to Ghana, Coach Matic,” the club tweeted.

Matic, who took over from Samuel Boadu early in the season, had steered the Phobians to five wins, two draws, and a defeat in eight games in all competitions before his departure.

He had also led the Rainbow lads to the third slot on the league table after a sloppy start.

In his absence, assistant manager David Ocloo managed a win, a draw, and a loss in the three games he was in charge.

Despite the fairly poor results, Hearts of Oak still occupy the third position. Matic’s first assignment after his retune will be against Samrtex at the Accra Sports Stadium on Sunday, January 15.

Coach Matic is back from Serbia ????????. He is expected to resume work today with the squad.