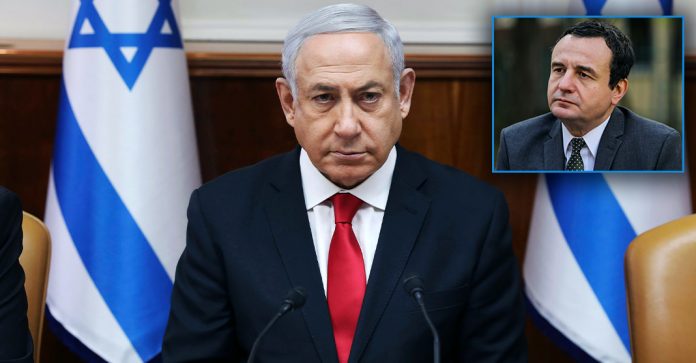 The Prime Minister of Israel, Benjamin Netanyahu, in his letter to the leader of the Vetëvendosje Movement, Albin Kurti, mentioned the recent agreement between Kosovo and Israel and also the decision of official Pristina to establish the Embassy of the Republic of Kosovo in Jerusalem.

In his congratulatory letter, Netanyahu said that he would be happy to welcome Albin Kurti to the inauguration of the Kosovo Embassy in Jerusalem.

“I consider very important the decision of Kosovo to open the Embassy in Jerusalem and I look forward to Israel for its inauguration,” Netanyahu wrote.

Mutual recognition of Kosovo-Israel has come as a result of the Washington agreement. Kosovo has decided to set up an embassy in Jerusalem, which has provoked a lot of reactions.

While from Vetëvendosje Movement for such a decision of Kosovo for the establishment of the Embassy in Jerusalem there have been different positions.

Glauk Konjufca said that if it will be a condition and request of the European Union, then they will consider such a decision. Haki Abazi had also stated that the position of the European Union is very important for Kosovo about where the embassy should be located, and according to him, Kurti should sit down with Brussels and Israel to resolve what Abazi considers ‘nodes’.

“It is complex to discuss at the diplomatic level that the EU’s position on where the embassy position should be is very important, because the position of the European Union is important for Kosovo.

“I think that the Kurti government will sit down with the utmost sincerity to talk to both the state of Israel and the EU to try to resolve this knot that was unnecessarily created by the previous government,” said Haki Abazi.

The European Union, meanwhile, has described it as a regrettable decision by Kosovo, as Brussels continues to recognize Tel Aviv as its capital.

“In general, it is always welcome when our external partners normalize relations between them.

However, when it comes to opening an embassy in Jerusalem, this is a decision regretted by Kosovo because it removes Kosovo from the EU positions on the status of Jerusalem, “said Peter Stano. “Scary increase of cases with Covid-19” – Will Prishtina return as we were not used to seeing?