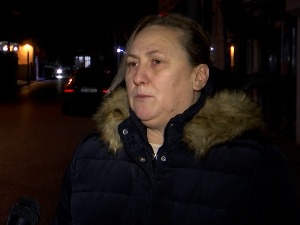 Suzana Trajkovic said that she was told that her husband was arrested around 6 pm and that he was accused of war crimes.

“We didn’t have any information until 9:30 p.m. I think it happened around 6:00 p.m. We were only told that he was arrested. I went to the southern part of Mitrovica in the region of the station, however, they were rude there. I went with my daughter. We waited. for more than an hour. First they beat us, they barely let us in, and then they threw us out,” says Suzana Trajković.

She mentioned that she was only looking for information on whether it was true that her husband had been arrested and where he was.

“We have information that he was transferred to Pristina. That we cannot see him and that he is accused of war crimes,” said Suzana Trajković.

He adds that she asked what war crimes, after 23 years, given that he was an employee of the MUP.

“As you can see, there is no justice towards the Serbs. This violence cannot be sustained any longer,” she noted.

The family lives in Bošnjačka Mahala in the northern part of Mitrovica and has three children. Slađan Trajković went to the store around 5 pm and did not return.

The Director of the Office for Kosovo and Metohija, Petar Petković, assessed that the new arrest of former Serbian police officer Slađan Trajković at Kosovo and Metohija shows that Kurti continues his hunt for Serbs and that he does not want to calm tensions and de-escalate the situation.

This is another arrest in a series. Serbs already they spend six days at the barricades which they set up due to the arrest of former police officer Dejan Pantić.