Journalist Vladan Radosavljević died in a canine assault on Kosmaj 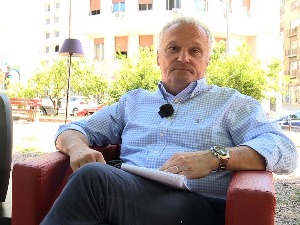 Vladan Radosavljević was attacked by a pack of dogs near his cottage on Kosmaj, and his wife Olga, whom he called for help, was seriously injured and transported to the Emergency Center.

As Fonet learns, given the circumstances, type and nature of the injuries, she will be transferred from the Emergency Center to the Infectious Diseases Clinic for further observation.

The Ministry of Internal Affairs, without giving further details, confirmed that a 62-year-old man was killed in the attack on Kosmajaand that his wife was seriously injured and taken to the hospital,

Radosavljević was a journalist of the former Studio B and director of the NTV Studio B program. He is one of the founders of the “Mreža” Production Group, and for a time he was also the director of “Media Center”.

The three dogs that mauled the man who later died on Kosmaj today were owner’s dogs with clear evidence of ownership, Tanjug was told at Veterinaria Belgrade.

The dogs wore collars with tags that had their owners’ phone numbers written on them.

Veterina Beograd says that three dogs came out of the yard through an open gate in Velika Ivanča and attacked a man and a woman who were passing by.

As stated in Veterina Belgrade, one of the dogs is a Stafford breed, one is a Stafford and pit bull mix, and the third is a mix of unknown origin.

All three dogs are in the quarantine of Veterinaria Belgrade.