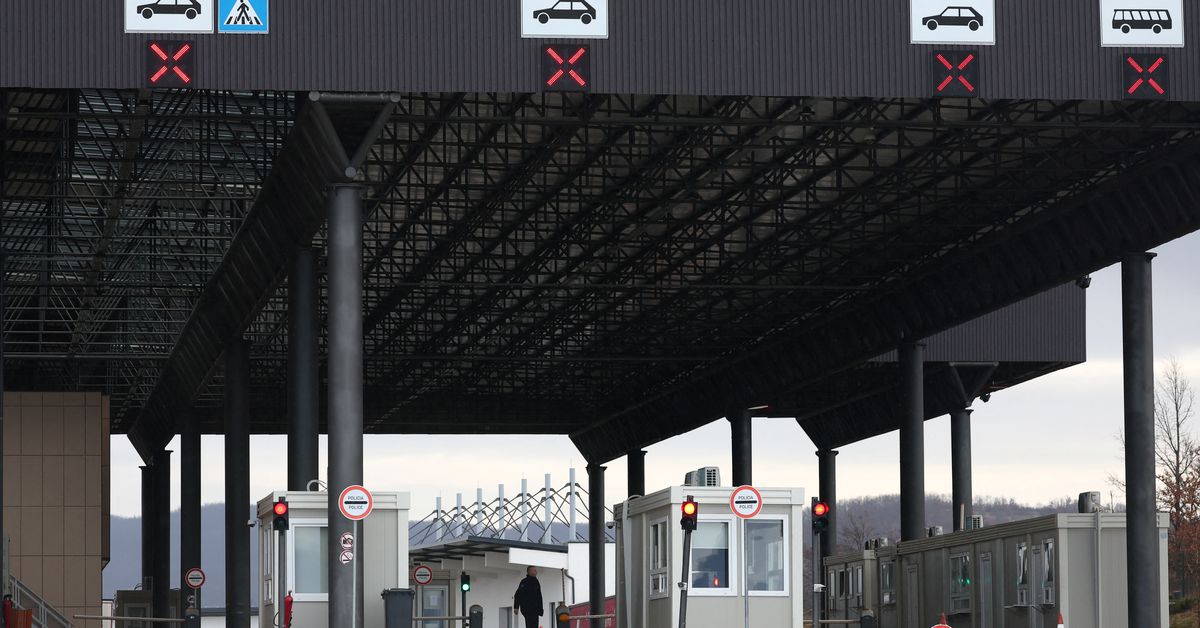 MERDARE, Kosovo, Dec 28 (Reuters) – Kosovo closed its biggest border crossing with Serbia on Wednesday after protesters blocked it on the Serbian side to support their ethnic kin in Kosovo in refusing to recognize the country’s independence.

Tensions between Belgrade and Pristina have been running high since last month when representatives of ethnic Serbs in the north of Kosovo left state institutions including the police and judiciary over the Kosovo government’s decision to replace Serbian issued car license plates.

Kosovan Interior Minister Xhelal Svecla said on Tuesday Serbia, under the influence of Russia, was aiming to destabilize Kosovo. Serbia denies it is trying to destabilize its neighbor and says it just wants to protect its minority there.

The Kremlin on Wednesday also denied the Kosovan accusations but said it supported Belgrade. “Serbia is a sovereign country and it is absolutely wrong to look for Russia’s destructive influence here,” Kremlin spokesman Dmitry Peskov said.

For over 20 years, Kosovo has been a source of tension between the West which backed its independence and Russia which supports Serbia in its efforts to block the country’s membership in international organizations including United Nations.

Since Dec 10, Serbs in northern Kosovo have exchanged fire with police and erected more than 10 roadblocks in and around Mitrovica. Their action followed the arrest of a former Serb policeman accused of assaulting serving police officers.

Serbia on Monday put its troops on highest alert. Late on Tuesday, Serbian President Aleksandar Vucic, who said Serbia was continuing to fight peace and seek a compromise, inspected the troops close to the border.

Serbs in Serbia used a truck and tractors on Tuesday to create the latest roadblock, close to the Merdare crossing on Kosovo’s eastern border, Belgrade-based media reported.

The government in Pristina asked NATO’s peacekeeping force for the country, KFOR, to clear the barricades. But KFOR has no authority to act on Serbian soil.

Kosovo’s Foreign Ministry announced on its Facebook page the Merdare crossing had been closed since midnight, saying: “If you have already entered Serbia then you have to use other border crossings … or go through North Macedonia.”

The Merdare entry point is Kosovo’s most important for road freight, as well as complicating the journeys of Kosovars working elsewhere in Europe from returning home for holidays.

With two smaller crossings on the Serbian border in the north closed since Dec. 10, only three entry points between the two countries remain open.

Pristina main airport was also closed on Tuesday morning over a bomb threat, Kosovo police said in a statement. Police did not say if it was related to the recent tensions.

Serbian Defense Minister, Milos Vucevic, said Vucic was in talks with the so called Quint group of the United States, Italy, France, Germany and Britain about the current tensions can be resolved.

Around 50,000 Serbs living in ethnically divided northern Kosovo refuse to recognize the government in Pristina or the status of Kosovo as a country separate from Serbia. They have the support of many Serbs in Serbia and its government.

Albanian-majority Kosovo declared independence from Serbia in 2008 with the backing of the West, following a 1998-99 war in which NATO intervened to protect ethnic Albanian citizens.

The very best wage within the IT sector in Serbia is 8,500 euros, what are the typical salaries?