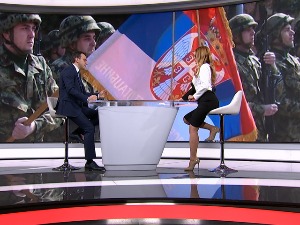 “This is our response to the immediate threat of war and all that Pristina is doing to carry out an attack on the north of Kosovo. Given that Pristina has raised the combat readiness of the Kosovo Security Forces to the highest level, preparing those units, long pipes and armored vehicles to attack the Serbian people in the north of Kosovo, with the intention of attacking our women, old people, children, men, our people who are on the barricades just defending the right to bare life,” Petković emphasized.

According to him, it burned to the nails.

“We are really doing everything to preserve peace, and this is primarily done by President Vučić. No one spoke more about peace and stability until President Vučić. When we talk about the relations between Belgrade and Pristina, you have Aljbin Kurti, who stated that it is a matter of days when they will remove the barricades , directly threatens to kill the Serbs at the barricades. He wants to create a new narrative that the attack on the north of Kosovo is the liberation of the north from some criminals, namely our mothers, doctors, professors, students… Those people are defending their right to remain on the barricades with dignity KiM. You saw a magnificent gathering near Rudar, where there were more than 10,000 Serbs. There is no one in Europe to hear their voice that they are disenfranchised, that the ZSO has not been formed for more than 10 years, that their right to vote is revoked, that they are banned vaccination. Not to mention ROSU raids, which have been almost every month lately,” said Petković.

The operational plan of Pristina is known

He notes that our services are doing their job seriously, that almost every step of Pristina and their operational plan is known.

“Pogrom and “Storm” will never happen again. This is what President Vučić said many times. It is important that our people know that behind them is the state of Serbia, which is ready to protect the lives of our people who do not bother anyone. They say in Pristina that freedom of movement is threatened. And tell us which Albanians are threatened with freedom of movement?” asked Petković.

The EU, he notes, instead of mentioning the barricades, should now do everything to force Pristina to give up its crazy decisions to attack the north of Kosovo. “He should have forced Pristina to form the ZSO, and not let us wait ten years,” says Petković.

He states that it is terrible the head of the Serbian Orthodox Church is prohibited from entering the Republic of Kosovo. It is the first time in history that a patriarch is forbidden to go to the Patriarchate of Peć.

“The patriarch is a man of peace, who preaches love. How is it possible that Kurti forbade the Serbian patriarch from going to the area of ​​Kosovo and Metohija, even though the visit was announced in accordance with the procedures on time. There was a shameful explanation from Pristina that the reason for the stop was that he had previously fenced himself off from of the Serbian people and the barricades. Aljbin Kurti would like to change centuries-old canons, to be the master of life and death,” says Petković.

Petkovic indicates that it is a Catholic Christmas, but that a way is being sought to preserve the Serbian people in Kosovo and Metohija, how to meet all the demands of the Serbs as a condition for them to withdraw from the barricades.

“It is better to negotiate for a thousand days than to fight for one. We don’t want that, the Serbian people don’t want that. The one who wants to attack the Serbian people with bare hands is Aljbin Kurti, who puts the army in combat readiness. No one will watch it and watch from the sidelines Today, President Vučić is at the head of the state, who will know how to save our people in Kosovo and Metohija,” said Petković.

The threats come from Pristina

He states that Serbia is ready to preserve peace and stability, but also to respond to threats coming from Pristina.

“The barricades represent a democratic and peaceful means for our people to express their dissatisfaction because they experience the terror and cruelty of Aljbin Kurti almost every day,” Petković points out.

The fact that combat readiness has been raised means the full responsibility of the state and government towards the people and the future of the country.

“We will not allow the pogrom of our people to happen. All the time we did everything to preserve the peace, raise our country, the economy, to open new factories, to raise salaries and pensions. We were looking for ways to normalize relations with Pristina and when she did not want to talks. We will protect our people, peace and stability and the future of our country, there is no surrender,” concluded Petković.