‘My Time to Live’: Through Novel Program, Kidney Patients Get Palliative Care, Dialysis ’Til the End 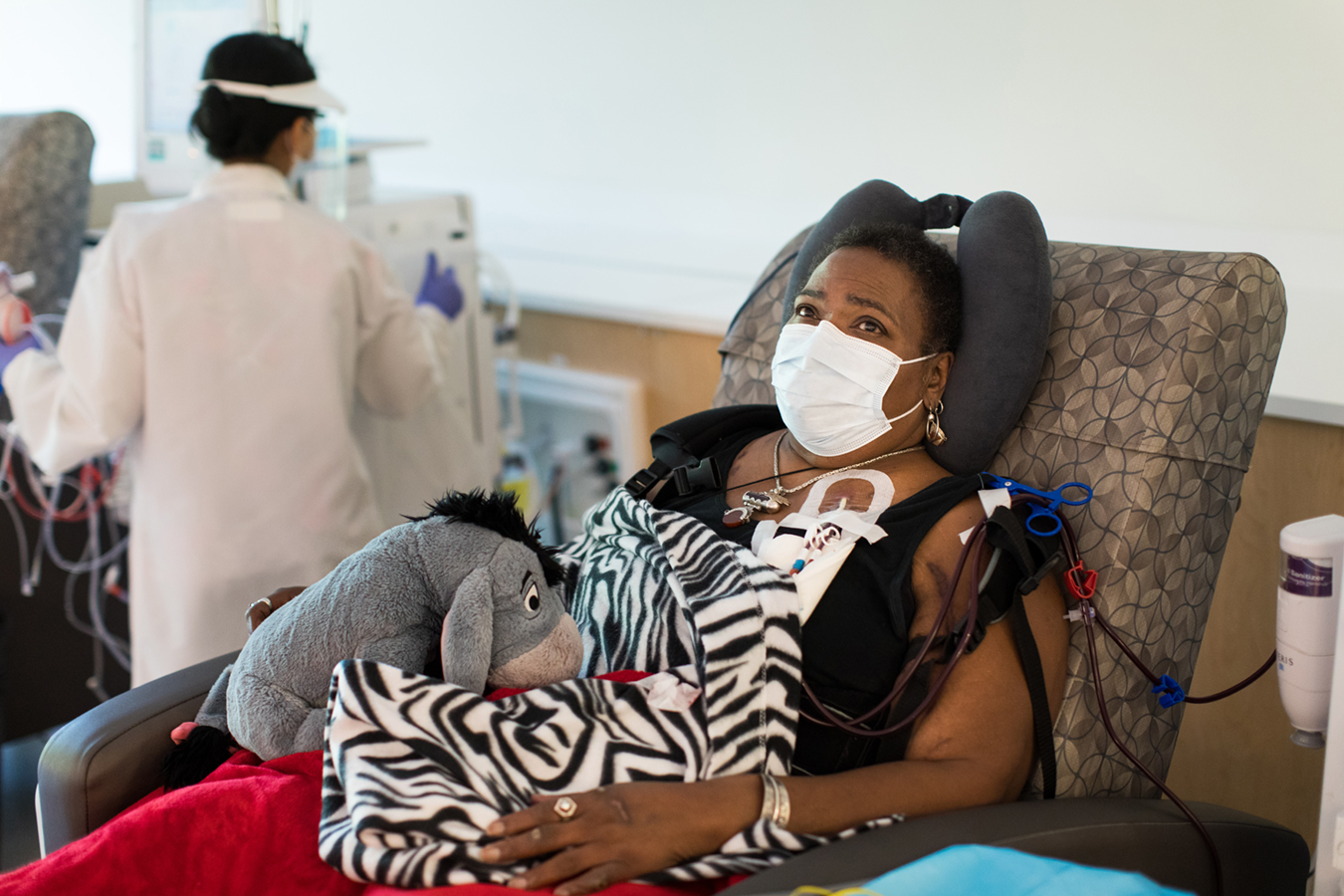 After a decade of living with chronic kidney disease, Vonita McGee knows her body is wearing out.

At 63, McGee undergoes dialysis sessions three times each week at a Northwest Kidney Centers site near her Burien, Washington, home to rid her blood of waste and water. She has endured the placement of more than a dozen ports, or access sites, in her arms and chest as sites became scarred and unusable. Late last month, doctors performed surgery to install yet another port near her left elbow, but no one is certain it will hold.

“Because of scar tissue, I was told this is my last viable access,” she said.

Without ongoing dialysis, McGee knows she could face death within days or weeks. But, unlike many of the nearly 500,000 U.S. patients who require dialysis, McGee said she’s had help making peace with the process.

“I know that things are coming,” she said. “I’m in awe of death, but I’m not afraid of it anymore.”

That’s largely attributed to a novel effort in Washington state that embeds palliative care within a kidney center whose clinics treat patients living with kidney disease; and then later pair dying patients with hospice care without forcing them to forgo the comfort that dialysis may still provide.

McGee is one of 400 patients enrolled since 2019 in a first-in-the-nation palliative care program housed at Northwest Kidney Centers, a Seattle-based operation with clinics throughout the region. The organization founded the first dialysis center in the U.S. — and the world — nearly 50 years ago.

Chronic kidney disease, or CKD, encompasses five stages, from mild damage in the organs’ functioning in stage 1 to complete kidney failure in stage 5. Most patients start preparing for dialysis — and kidney failure — in stage 4. Dialysis does not cure kidney failure. The only other option for treatment is an organ transplant.

Dialysis patients typically face distressing physical, emotional and spiritual symptoms throughout their treatment, ranging from pain, shortness of breath and intense itching to depression and panic. The symptoms can grow dire as years pass.

But only a fraction of those patients, 4% or fewer, ever receive specialized palliative care that can effectively target those issues, said Dr. Daniel Lam, the University of Washington nephrologist and palliative care expert who launched the program with the help of a two-year, $180,000 grant from the Cambia Health Foundation. Attention to palliative care in nephrology has lagged behind its use for advanced cancer, for instance.

That’s especially true for Black patients and other minorities, who are disproportionately more likely than white patients to require dialysis, but far less likely to receive quality palliative or end-of-life care.

“We’re trying to address this current and projected gap,” Lam said. “What we are doing is asking people how do they want to live their lives and what’s most important to them.”

If McGee’s condition deteriorates to the point that she has a prognosis of six months or less to live, she will then be a candidate for a related partnership between the kidney center and the nonprofit Providence Hospice of Seattle, which would allow her to continue to receive dialysis even after hospice care begins.

While the goal of both hospice and palliative care is pain and symptom relief, hospice has traditionally been regarded as comfort care without the intent to treat or cure the primary disease. The nuance with dialysis is that it is central to keeping a kidney patient’s body functioning; discontinuing it abruptly results in death within days.

“The goal of this program is to provide kind of a smooth off-ramp from curative dialysis to the end of their lives,” said Mackenzie “Mack” Daniek, who co-directs the hospice.

Most dialysis patients face a harrowing choice between continuing dialysis or receiving hospice services. That’s because the Medicare hospice benefit, which took effect in 1983, provides palliative care and support for terminally ill patients who have six months or less to live — and who agree to forgo curative or life-prolonging care.

That rigid requirement could change in the future. The Centers for Medicare & Medicaid Services has approved an experimental model that will allow concurrent care for some patients starting next year. But, for now, Medicare will not simultaneously pay for dialysis and hospice care for patients with a terminal diagnosis of kidney failure.

Hospices receive a daily per-patient rate from Medicare, typically $200 or less, and must use it to cover all services related to the terminal diagnosis. Dialysis can easily cost $250 a session, which means only the largest hospices, those with 500 or more patients, can absorb the costs of providing concurrent care. Only about 1% of the more than 4,500 hospices in the U.S. meet that mark.

The result? About a quarter of dialysis patients receive hospice care, compared with about half of the general Medicare population. And their median time spent in hospice care is about five days compared with more than 17 days for the general population. This means that dialysis patients often receive aggressive medical treatment until the very end of life, missing out on the comfort of targeted end-of-life care.

“What’s happened through the years is when a dialysis patient is ready to stop treatment, that’s when they come to hospice,” said Dr. Keith Lagnese, chief medical officer of the University of Pittsburgh Medical Center Family Hospice. “They’re forced to draw that line in the sand. Like many things in life, it’s not easy to do.”

Lagnese said the Seattle program is among the first in the U.S. to address palliative and hospice care among dialysis patients. His UPMC program, which has experimented with concurrent care, allows patients up to 10 dialysis treatments after they enter hospice care.

In the Washington state program, there’s no limit on the number of sessions a patient can receive. That helps ease the patient into the new arrangement, instead of abruptly halting the treatment they’ve been receiving, often for years.

“If they’re faced with immediately stopping, they feel like they’re falling off of a cliff,” said Lam, the program’s founder.

In McGee’s case, she’s had the benefit of palliative care for three years to help negotiate the daily struggles that come with dialysis. The care focuses on relieving the physical side effects, and emotional symptoms such as depression and anxiety. It also addresses spiritual needs, which McGee said has helped augment the comfort she finds as a member of the Baha’i religious faith.

“They provide mental support, and they inform you what you need to do to do things properly, and they’re your liaisons,” McGee said. “Basically, I was just living before without knowing the information.”

When she considers her degenerating medical condition and the possibility that it will become too difficult, even impossible, to continue dialysis long term, she said she welcomes the option to ease into the final stage of her life.

“Do I feel scared? At one point, I did,” McGee said. “But they are assuring me that my rights will be honored, they will be advocates for me when it happens. By having that support, it gives me my time to live.”